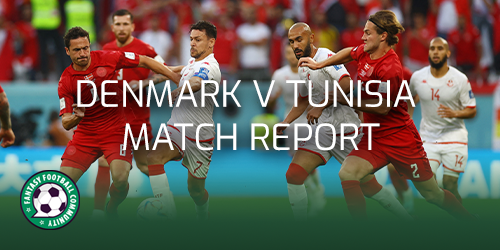 The World Cup is now here. Our first Group D kick off begins today. We take a look at the Denmark v Tunisia match. We will highlight the line-ups, pick out the key moments and standout World Cup Fantasy performances during the match.

Joakim Maehle (£4.5m) starts whilst being one of the most owned defenders in the game. Maehle’s owners will be hoping for at least a clean sheet from him. Another player many within the community have selected is midfielder Andreas Skov Olsen (£6m) who also starts.

Budget enabler and midfielder Wahbi Khazri (£4.5m) fails to make the starting line-up but makes the substitute bench. Many fantasy managers may have selected the Tunisia goalkeeper Aymen Dahmen (£4m) who also starts the match.

I did not expect Denmark to dismantle Tunisia due to my experience of watching multiple defensive displays by Tunisia in their recent African Cup of Nations. However, I did expect a Denmark win. Tunisia held up well but once again reflected their bluntness in attack.

Maehle was quite attacking and got into some really great positions and Eriksen took nearly every set piece. Both players look like promising assets moving forward.

Who were the standout players from Group B in Matchday 1? Catch our article here.