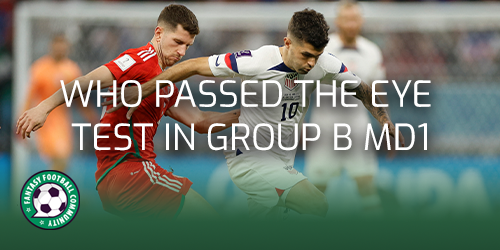 The World Cup is now well underway. With a focus on the matches played between England v Iran and Wales v USA on Monday, we look at who passed the eye test in Group B Matchday 1 to highlight which players played well for World Cup Fantasy managers.

Looking at who passed the eye test in Group B Matchday 1 can help focus on the best performing assets. Whether the players returned points or not, it could be beneficial for fantasy managers to know which players looked bright and have the potential to return.

England played against and Iran in Matchday 1 and although many expected an England win, no-one expected a 6-2 goal fest. The English were relentless and one of the players that caught the eye was midfielder Bukayo Saka (£8m).

Saka was a danger from the off. He was always looking to create and shoot in the opponent’s box and wasn’t shy of taking on his man. Saka was by far the sharpest attacker for England and that sharpness was rewarded with two goals.

England did concede two goals in their match against Iran, but their defensive assets were dangerous throughout the match. Although the fullbacks were creatively dangerous in terms of World Cup Fantasy, centre back Harry Maguire (£5.5m) was the standout in the backline.

Ther winners looked strong on set pieces and the reason they did was because of Maguire. Although there were a couple of defensive slip ups from him, Maguire picked up an assist for a goal and also hit the bar from a corner. Maguire was aerially dominant and could have come away with a couple of goals.

USA drew in their fixture against a defiant Wales. Although their performance slipped in the second half the American’s first half was incredible. USA managed to starve Wales of possession and put mass amounts of pressure on their opponent’s.

One of the standout players from USA was Christian Pulisic (£7.5m). The midfielder looked to be the best player on the pitch for most of the game, using his turn of pace to beat countless opponents and create for his team. Pulisic’s performance was rewarded, and he came away with an assist.

Wales were absolutely awful in the first half. They struggled to put passes together and for most of the first half couldn’t get out of their own half. Something had to change for the Welsh and that change came at half time.

Kieffer Moore (£6m) came on for Dan James and completely changed the game for Wales. His hold up play and dominance in the air was a massive contributing factor to Wales drawing level. Although Moore wasn’t rewarded with a goal contribution, Matchday 2 could look really promising for him.

Did you miss out on the England v Iran match? We pick out the key moments and standout fantasy performances with our report here.