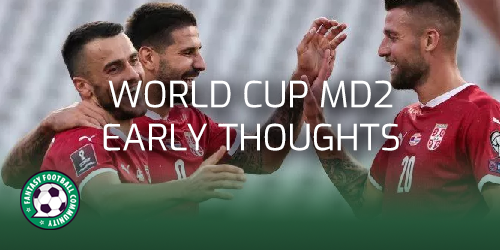 A collection of early World Cup Fantasy thoughts for Matchday 2, which begins on Friday and lasts until next Monday.

At a rate of four games per day, the groups are being quickly raced through. Highlighted by European heavyweights Spain and Germany facing off, Matchday 2 also gives us juicy encounters like France v Denmark, Portugal v Uruguay and England v USA.

A chunk of FIFA Fantasy managers intend to Wildcard at this point, hoping that game rules do indeed allow further unlimited transfers to take place between the final kick-off and the start of Matchday 3.

With that in mind, the below thoughts are given two days in advance.

The game allows one captaincy switch from someone whose team has already played, to another yet to. That means it could be worth initially putting the armband on someone like Gareth Bale (v Iran) or Robert Lewandowski (v Saudi Arabia), in the hopes of catching a differential haul.

Although Iran conceding six times was out of character for a usually defensive team, the determined Wales captain is on penalties – as seen in Matchday 1.

Day 1 of 4 pits Harry Kane against the United States. Despite not scoring during England’s heavy win, he assisted twice and has been in great club form for Tottenham. Just two goals away from equalling Wayne Rooney as England’s all-time leading scorer, he’s a great pick.

Naturally, there is also Lionel Messi versus Mexico. The Argentine talisman is fixture-proof, on penalties and happens to be Lionel Messi!

It’s hard to predict some of the leading nations. France lost both summer meetings to Denmark in the Nations League, whilst this is being written before Brazil face their first European opponent in almost four years. Serbia first, then Switzerland.

Elsewhere, it’s advisable to own a Senegal asset against Qatar like Ismaila Sarr or Boulaye Dia. There should be another start for Bukayo Saka following his Matchday 1 brace, whilst an attacking Serbia talent could prove profitable against Cameroon.

Each of the four days climaxes with a great-looking match, so let’s enjoy Matchday 2 and grab some Fantasy points.