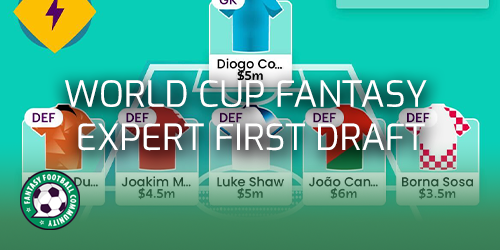 The World Cup starts this Sunday. This means we are just a couple of days away from the start of the tournament. We take a look at a World Cup Fantasy expert first draft from Fantasy Football Scout and Fantasy Football Community writer @FPLReaction (Louis).

Taking a look through a World Cup Fantasy expert manager first draft can be really helpful to those looking to build their teams. @FPLReaction has bags of international knowledge and huge experience playing World Cup Fantasy games.

It is worth mentioning this is only a first draft based on fixtures, form and prices. This draft will inevitably change as we progress closer to the deadline. Chips/boosters will also come into play as we draw nearer to the start of the World Cup.

My experience playing Champions League Fantasy has led me immediately to Diogo Costa (£5m) of Portugal. His heroics for Porto in the Champions League this season are hard to ignore. He managed three penalty saves in three consecutive matches, clean sheets and an assist. That is enough to interest anyone.

Premium defenders Denzel Dumfries (£6m) and Joao Cancelo (£6m) have both been fantastic as of late. Both players provide excellent offensive output and could be tough to leave out. Someone may have made a mistake pricing Joakim Mæhle at £4.5m. He should be in every fantasy team draft we make in the build-up to the World Cup, do not exclude him.

England have the potential to keep clean sheets in all of their World Cup group stage matches. Luke Shaw (£5m) has offered a premium return rate when playing for his country. He is quite honestly, a completely different player for England. Borna Sosa at £3.5m could potentially be one of the best prices in the game. There is no need to leave Sosa out.

Joshua Kimmich makes the draft due to his multiple routes to points for assists, goals, key passes, tackles and ability to hit steady points. Wahbi Khazri (£4.5m) could be one of the best midfield enablers in the game. The Tunisian takes penalties and sometimes finds himself in a striker position. Andreas Skov Olsen (£6m) is arguably massively under-priced. His club and international form is impressive and can’t be ignored.

Luka Modric (£8.5m), for me, is one of the top two midfielder options in the game. He takes penalties, set pieces, maintains fantastic key pass rates and can score. Now it could be vital to invest in the Netherlands attack and for that reason the form of Steven Bergwijn (£7m) should be recognised.

The three forwards are Lionel Messi (£10.5m), Neymar (£10.5m) and Kylian Mbappe (£11.5m). All three take penalties, play for very strong offensive sides and have been three of the best attackers in the world this season.

You can check out our wide range of World Cup Fantasy articles, all in one place, right here.