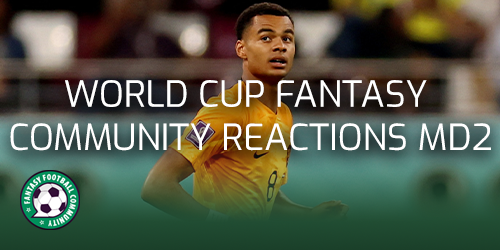 The World Cup is here! The matches are now underway and many within the community will be reacting to all of the key moments that has happened so far. We delve into Twitter and check out some of the best World Cup Fantasy community reactions in Matchday 2.

Checking out the community reactions in Matchday 2 can be really beneficial to World Cup Fantasy managers. Community reactions can highlight things like line-ups, performances and key moments that could have a major impact on our fantasy teams.

Joe emphasised the frustration within the World Cup Fantasy community for Senegal. Senegal faced a poor Qatar team in Matchday 2 and came out as victors in their 3-1 win. However, some of the favoured assets failed to perform.

Ismaila Sarr was one of the most popular fantasy assets this week. Sarr failed to create any goal contributions within the match and finished the game with one point. Another favoured asset was defender Youssouf Sabaly. Senegal conceded after losing concentration which meant another blank.

Wale highlighted one consistent World Cup Fantasy asset. Netherlands drew to Ecuador in their Matchday 2 game this week. However, one player stood above the rest and that player was Cody Gakpo. Gakpo secured his second attacking return of the campaign with his goal.

FPL Banger Podcast was one of the many within the World Cup Fantasy community favouring Bukayo Saka for Matchday 2. England faced USA in the second round. The English really struggled to break USA down and that was reflected in their failure to score.

Bukayo Saka came into his Matchday 2 game after just scoring a brace against Iran. For that reason, Saka was heavily targeted by fantasy managers for this match. Unfortunately, along with England’s struggle to score came a blank for Saka.

Fantasy Football Scout and Fantasy Football Community contributor @FPLReaction (Louis) highlighted some success in Matchday 2. England failed to score but did manage to keep their opponents out in their match.

England kept a clean sheet and that meant plenty of returns for their defensive assets in World Cup Fantasy. Two of those that benefitted from the clean sheet were popular players Luke Shaw and Kieran Trippier, both banked six points each.

Be sure to keep up to date with all of our World Cup Fantasy articles right here.