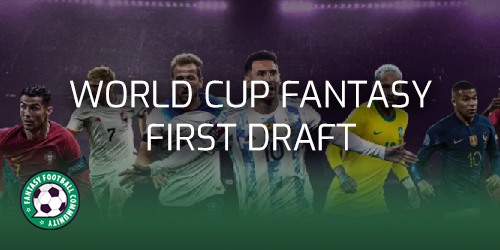 Recent Fantasy Premier League (FPL) weeks have been a season-ending disaster, considering a 20k rank had me dreaming and yet, four Gameweeks later, I’m in freefall down to 186k.

So this World Cup is a relief for my mental health and I hope to use FIFA’s Fantasy game as a confidence booster.

My first draft is below, although the official site is still lacking many participating players as of Wednesday morning.

Similarly to FPL, managers get a $100m budget to use on a 15-man squad. There is an initial limit of three players per nation, with chips available to deploy (12th Man, Power Captain and Wildcard).

Yet it’s the post-deadline ability to switch players in and out of the XI that is akin to Champions League Fantasy. Therefore the World Cup schedule is hugely important, as a squad with fairly even coverage of the eight groups enables constant switching and allows riskier picks.

With this in mind, here is where my mind is currently at before the team reveal.

Although the blank-or-switch rule allows you to try out cheap assets costing as little as $3m, in case they succeed, the general pricing seems so low that it’s hard not to use the remaining budget to upgrade them.

Meanwhile, the midfield is composed of mid-priced names that don’t need the long-term comfort that premiums bring to FPL. Steven Bergwijn ($7.0m) usually plays further upfield and, being in Group A, he will be my first captain.

Bukayo Saka ($8.0m) and Andreas Skov Olsen ($6.0m) are against Iran and Tunisia in Matchday 1, although Eden Hazard ($8.0m) is very unlikely to stay in. I’m waiting on more names being added for the late-group nations.

Up front, Lionel Messi ($10.5m) and Kylian Mbappe ($11.5m) are megastars, we know they’ll be brilliant. Richarlison ($7.5m) is a good way to get Brazil coverage, as he seems to be their number one forward.