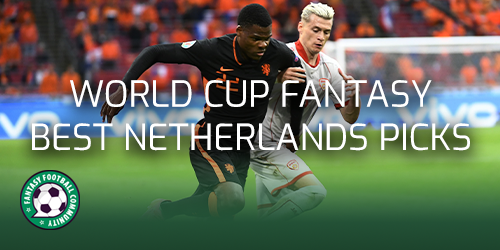 The 2022 World Cup in Qatar is closing in. The Official Fantasy game has now officially been released for managers to build their teams and look at all of the player prices available. With that in mind we look at the World Cup Fantasy best Netherlands picks.

Fantasy managers will be hoping to get a better idea of which players they could target ahead of building their squads. Netherlands are amongst the top teams as favourites to progress. For that reason, it could be important go through the best Netherlands picks in the game.

Trying to compare Memphis Depay’s club and international career would be pointless. Depay, like some, becomes a completely different beast for country. The striker has become fantasy football gold over his recent international campaigns.

Depay sits at £8.5m in the game and takes the Netherlands penalties. But if that wasn’t enough his fantastic numbers for his country should be. In his six World Cup qualifiers, Depay managed to score six goals and create seven assists. This tallies to a whopping 13 returns. Depay’s great output was reflected in his most recent Nations League campaign. He scored three goals and created one assist in his four matches.

Depay was injured. However, strong sources have shown him in full training and taking place in shooting drills. Could the Netherlands main man start in Matchday 1?

Denzel Dumfries (£6m) has been one of the most exciting wing backs to watch in world football recently. Dumfries loves to get forward and has one of the most impressive heat maps in Europe in his position. This means he is constantly in attacking positions.

Dumfries has shown his offensive ability in his recent tournaments for Netherlands. In his recent Euros campaign, he scored two goals in just four matches. Reinforcing his potential was his recent Nations League output. Dumfries managed two goals and one assist. This led to three attacking returns in five matches played.

Steven Bergwijn does not have the international numbers the other selections have. This is because of his turbulent and inconsistent club career a Tottenham. His recent move from the English club to Ajax has provided Bergwijn with both form and minutes. Ultimately, his move has placed him amongst the best attackers in the Netherlands squad and one of the most likely starters in the team.

For Ajax, the midfielder has already bagged eight goals and three assists. This tallies to 11 returns in the 14 matches he has played. That great ajax form has translated into his international team. In his last 10 matches for Netherlands, Bergwijn bagged six goals and one assist.

Want to know who the best picks are for World Cup Fantasy Matchday 1? Check out our mega article here.