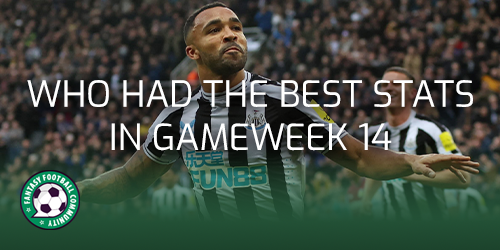 We look at who had the best stats in Gameweek 14. Using the Fantasy Football Scout members area, we take a look at some of the players that topped the key attacking stats from the latest round in FPL. Stats will include underlying data points like shots on target, chances created and other important stats to give us an indication of which players did well.

Looking at who had the best stats in Gameweek 14 can indicate which players did well. Even if the players who topped the stats didn’t return any points. This can be a good sign that the players were close to returning. FPL managers are always on the lookout for assets that could potentially return in the future. This could help with that.

Son Heung-min (£11.7m) has found it very difficult to justify his big price-tag for FPL managers all season. In fact, in the 13 matches he has played this season, Son has managed to collect just three returns all season.

Although that is the case, the Tottenham midfielder put up some fantastic distribution stats in Gameweek 14. Amongst all players in league, he ranks first for crosses (17), joint first for successful crosses (five) and second for chances created (six). Son failed to covert those great stats into FPL points as he returned just two points.

Another player that is struggling to maintain a good FPL output this season is Andy Robertson (£6.7m). The Liverpool left back has picked up just three returns all season. This could be mainly due to Liverpool’s lack of form this season in general.

Gameweek 14 was a good one for the Liverpool man. Amongst all players in the league, Robertson was third for crosses (12), joint first for successful crosses (five) and joint fourth for chances created (four). Robertson was rewarded for his fine stats this week with his seven-point return. His points consisted of an assist and three bonus points.

Many FPL managers questioned Aleksander Mitrovic’s (£6.9m) ability ahead of the new Premier League season. These doubts have been met with the striker proving managers wrong. The Serbian has hit a huge eight returns in his start to the season.

Newcastle continue their surprisingly fantastic start to the Premier League season. That great start has meant their assets have seen a big increase in their FPL output. Striker Callum Wilson (£7.4m) is one of the players that has benefited.

Amongst all players in the league, Wilson ranked joint first for goals (two), joint fourth for attempts on goal (four) and joint first for big chances (three). The forward managed to convert those good stats into plenty of FPL points. Wilson picked up a massive 19-point haul. Those points came from his two assists, two goals and three bonus points.

What to expect from Gameweek 15? We answer exactly that right here.