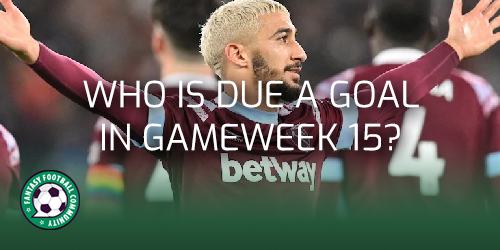 Picking out the players that look likely to score in an FPL gameweek is a big part of management. Using recent underlying stats from the Fantasy Football Scout, we assess which players are due a goal in Gameweek 15.

Due a goal in Gameweek 15

Last week, success was correctly predicted for Mohamed Salah, Marcus Rashford and Callum Wilson. The Newcastle forward did so in style, bagging two goals, two assists and 18 points during the 4-0 thrashing of Aston Villa.

Of the three, Rashford remains on this list as he is still under two goals from four matches.

And the Manchester United midfielder is a strong option for the final pre-World Cup weeks. Recently used as an out-of-position forward, Sunday’s goal actually came from the left-hand side as Cristiano Ronaldo started up front.

As the 37-year-old is back in Erik ten Hag’s plans, there is a slight risk of Rashford rotation, as Jadon Sancho missed out this time. Still, scoring the only goal in a 1-0 win surely keeps him as a starter for the two matches away to Villa and Fulham.

Those opponents include Ollie Watkins and Willian, who lead the week’s names for xG. It’s a surprise to see both Willian and ex-Chelsea team-mate Diego Costa appear but the latter will miss Wolves’ next two league outings because of the headbutt on Ben Mee that brought a red card.

Elsewhere, Danny Welbeck is eternally here but never scores, whilst Che Adams finished with 0.76 fewer goals than his weekend xG – only Willian’s 0.78 underachieved by more.

Said Benrahma is the sole West Ham player here, as Jarrod Bowen and Gianluca Scamacca don’t meet the criteria anymore. The Algerian differential has had 15 shots over his last four games and is about to host Crystal Palace and Leicester.