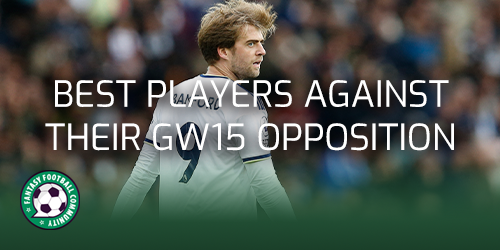 We take a look at some of the best players against their Gameweek 15 opposition. Using previous head-to-head records and underlying stats from the Fantasy Football Scout members area to help us pick out some great FPL picks for the round ahead.

Picking out the best players against their Gameweek 15 opposition could be helpful in making both transfer and captaincy decisions. The more information FPL managers have the better our decisions tend to be in terms of having successful assets in our fantasy teams.

Leeds forward Patrick Bamford (£7.2m) had a fantastic first season in the Premier League. His great first performance led to him hitting 194 FPL points. Unfortunately, Bamford has failed to hit the heights of his first season recently.

The striker has managed just two returns all season. However, he faces Bournemouth in Gameweek 15. As we can see Bamford has had great success against promoted teams. In his seven matches against them he has returned in four. Interestingly, those four returns have come in his last four matches on the bounce.

Brighton midfielder Leandro Trossard (£6.9m) has been a wanted man this season. The Belgian’s ownership has rose to 21% in the game. That rise in ownership could be due to his performances this season.

Trossard has notched up six returns this campaign. Those points include two double-digit returns. What is even more interesting is that he scored against both Chelsea and Man City in the previous two Gameweeks. We can see that Trossard has bagged returns in three of the six matches he has played against Wolves.

Leicester forward Jamie Vardy has been prolific in some of his recent Premier League campaigns. Although that is the case, the striker has picked up just four returns all season. However, Vardy does have a successful FPL record against Everton.

We can see that in the 12 matches Vardy has played against his Gameweek 15 opponent, the Englishman has returned in eight of them. Those points consist of six goals and five assist. Vardy has nearly matched the same amount of attacking returns as games played against Everton.

Man City midfielder Kevin De Bruyne (£12.5m) has enjoyed a great period of form this season. The Belgian has bagged a whopping nine returns in his first 12 fixtures. De Bruyne also has a brilliant record against newly promoted teams.

We can see below that De Bruyne has returned in nine of his last 12 matches against newly promoted sides. Those returns consist of five goals and eight assists. That tallies to 13 returns in his last 12 matches. With great fixtures ahead, many managers could be looking to bring him into their teams.

Who has the best fixtures in Gameweek 15? Check out this article here.