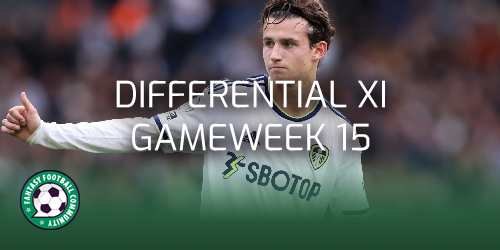 In this weekly series, Will from Fantasy Football 92 explores the low ownership differential options that could be the hidden gems to help you climb up those world rankings. He is his best differential XI for Gameweek 15.

Here are the differential options we like the look of for Gameweek 15.

Leeds’ Illan Meslier is the top goalkeeper for the week. He had a busy evening at Anfield last time but passed the test with flying colours. Could a clean sheet against Bournemouth be on the horizon this week for the young Frenchman?

Targeting the set-piece takers and targets against Leicester is still a useful tactic, so James Tarkowski is an outside pick for this week. Everton’s defence has improved in recent weeks and big Tarks is surely due a goal from an enticing Demarai Gray cross.

Alongside him is Luke Shaw, whose latest renaissance comes at the perfect time in regards to his World Cup ambitions. Aston Villa and Fulham are appetising opponents before the England squad flies out to Qatar.

Rico Henry completes the back three as a real outsider. Brentford play Nottingham Forest this week and are hopeful of an overdue away clean sheet.

Could Jack Grealish burst into life just in time for the World Cup? Man City host Fulham and Brentford in an extremely appealing final two pre-tournament games, where Grealish will be desperate to shake off the Miguel Almiron comparisons and catch the eye of Gareth Southgate.

Brenden Aaronson and Demarai Gray are two set-piece demons looking to make the most of favourable home matches. Gray, in particular, has been incredibly unlucky to not have picked up more attacking returns of late.

The remainder of the midfield contains two mega-low ownership options, each with 0.3% ownership. Adama Traore’s end product is one of football’s hottest topics but he’s managed a goal and assist since reclaiming his spot in the team. Wolves will rely on him to produce some creativity at home to Brighton while struggling Forest will need the same from one of their very few bright sparks – Morgan Gibbs-White.

With Ivan Toney suspended, it’ll fall on the shoulders of Bryan Mbuemo to lead the Brentford line at Nottingham Forest. As well as his normal free-kicks, Mbuemo should also be in charge of penalties, making him their main asset this week.

Joining him in attack here is Gianluca Scamacca, who hasn’t found the net for a few matches. A home match against the Crystal Palace side that was thumped by Everton on their last away trip represents a great chance for him to get back on the scoresheet.