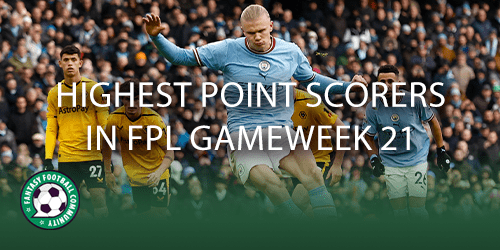 The latest round of Premier League football is still live but we can look back and reflect on the top 10 highest point scorers in FPL Gameweek 21 so far. We examine how some those players picked up their points whether it be through goals, assists, clean sheets or save points.

Taking a peek at the highest point scorers in FPL Gameweek 21 is a great way to understand how the round went. Monitoring the best assets every Gameweek could help in noticing patterns of form which can then aid with transfers and captaincy decisions moving forward.

West Ham needed a result in Gameweek 21 and with the help of their returning to form star man Jarrod Bowen (£8m), they did exactly that. The midfielder hit a massive 16-point haul this week making him the second highest scoring player of the Gameweek. Bowen’s points consisted of two goals and three bonus points.

We saw another big win for Arsenal as they beat the in-form Manchester United. There was plenty of goals, which meant it was a successful game for the Arsenal frontline. Striker Eddie Nketiah (£6.6m) managed a big 13 points after scoring two goals and picking up three bonus.

West Ham’s 2-0 win over Everton continues to dish out the FPL points. Defender Kurt Zouma (£4.4m) secured his second double-digit return of the season. The centre back kept a clean sheet, created an assist and earned two bonus points to reach a cool 11 points, making him the fourth highest scoring player of the Gameweek.

Bournemouth prevented their slump extending after claiming a point in Gameweek 21. The newly promoted side rescued a draw against Nottingham Forest. Midfielder Jadon Anthony (£5.2m) scored a goal and earned all bonus, taking him to 10 points. This made him the joint fifth highest scoring player this week.

Miss the Fulham v Tottenham match? You can catch up with out match report here.