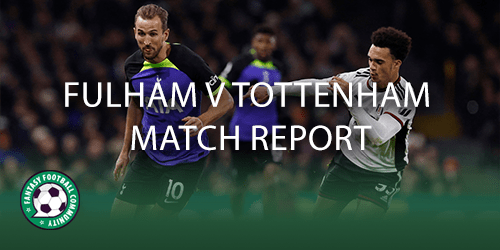 Taking a look at line-ups, goals, assists, clean sheets and anything else we could highlight that could have implications for FPL managers. We cover the Fulham v Tottenham match report. Covering eye test and key moments through-out the match with the help of the Fantasy Football Scout members area.

Overviewing the Fulham v Tottenham match report can be helpful in identifying key moments in the match. This can then give FPL managers a good insight into which players and teams looked good, key injuries, fitness and even more to help us make decisions in FPL.

Brazilian midfielder Willian (£5.5m) starts the match. He will be hoping to extend his great run of form which has seen him bag three returns in his last five matches. Many within the community could be relying on striker Aleksander Mitrovic (£7.1m) to score his first goal since Gameweek 19.

One player who fails to make the starting line-up is defender Matt Doherty (£4.6m). The wingback failed to start the previous match to the dismay of his owners. Main man and striker Harry Kane (£11.7m) also starts the game.

Be sure to stay up to date with all of the latest transfers and gossip with our article here.