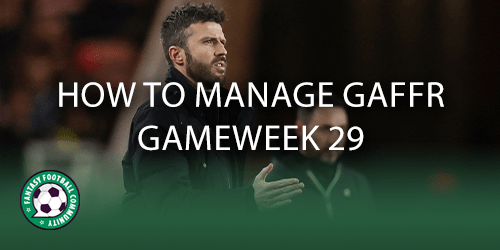 With Gameweek 28 of Championship Fantasy now complete, We take a look at how to manage GAFFR Gameweek 29 which is a blank Gameweek. Taking into consideration the fixtures that are playing, captaincy and key players.

The most active managers thrive off challenges like double and blank Gameweeks throughout any fantasy season. Taking a looking at how to manage GAFFR Gameweek 29 could help answer some of the biggest questions going into the blank.

We can see from the tweet below that experienced GAFFR manager and content creator @Angus81 has been keeping track of fixtures playing in Gameweek 29. Luton v Cardiff looks set, moving to Gameweek 29 which is the round ahead.

What fixtures are playing?

There are four fixtures playing in total in Gameweek 29, at the time of writing.

How many players is enough?

Similar to any other platform, this is one of the most asked questions. Like always, it could be a case of quality over quantity and making sure we have cover from each team or at the very least, the key players from the teams that are playing.

Many could just want to play it safe so team cover could be vital to protecting rank. Covering the following could be key going into Gameweek 29:

Covering those positions with assets could be key due to their expected ownership, especially with the key players.

Who are the key players?

The above are very likely to be heavily owned amongst the best managers going into Gameweek 29.

Which Man United players should we buy for the double Gameweek ahead in FPL? Take a look here.