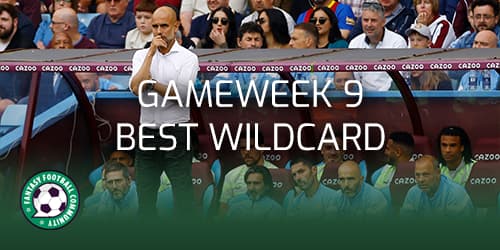 Looking at the Gameweek 9 best wildcard team. Using the Fantasy Football Scout season ticker, we can see which teams have the best run of fixtures. This can then aid FPL managers in picking out some of the best assets for the run ahead.

Leicester rank third on the fixture ticker for having the easiest fixtures until the World Cup. Although struggling defensively themselves, the Foxes face some of the worst attacks in the league. Backing both Ward (£4m) and Iverson (£3.9m) not only enables money to the rest of our teams, but also makes sure we have a playing goalkeeper at all times.

West Ham rank sixth on the fixture ticker, meaning it could be beneficial to invest in them for FPL managers. Coufal (£4.4m) comes in at one of the cheapest prices in the West Ham defence. Not only does he enable the rest of the team, but he’s also started the last five matches for the Hammers, so his minutes seem secure.

Although Chelsea sit mid-table on the ticker, they don’t face a tough team until after the world cup. Defender James (£6m) has picked up three returns in six matches. Considering Chelsea are out of sorts, that could be seen as good. The wingback has huge potential, that was proven in his five goals and nine assists last season. Man City have one of the best defences in the league and Cancelo (£7.2m) is the second highest scoring defender in the game. The Portuguese defender eases his way into the team.

Both Newcastle’s Trippier (£5.4m) and Liverpool’s Trent (£7.4m) have some of the best distribution stats in the game. Both also have the additional route to points from set pieces. For those reasons, they make the best wildcard team.

Nottingham Forest’s Colback (£4.3m) makes the team due to his price and nothing else. The Forest man will likely sit as the third sub until the unlimited transfers arrive after Gameweek 16. Fulham’s Andreas (£4.6m) is also included primarily due to price. Andreas does, however, have the ability to start in every match. His attacking position makes him a perfect enabler and if needed, could start with potential to return points.

Although Liverpool man Salah’s (£12.9m) form has been questionable, the Egyptian has proved time and time again going without could be a huge risk. For that reason, he is an easy inclusion. Leicester rank third on the fixture ticker and face some of the worst defences in the league. Maddison (£7.9m) has already picked up four returns from his seven matches and has more attempts on goal than most players in the game.

Crystal Palace rank top of the fixture ticker and so have the easiest fixtures in the league up until the World Cup. Penalty taker Zaha (£7.2m) has already collected returns in half of his matches played so far. For that reason, he makes the team.

Man City remain the best team in the league for scoring and creating opportunities. Haaland (£12m) remains both the highest scoring and highest owned player in the game. Excluding him could cause serious harm to our ranks.

Although Fulham rank seventh on the fixture ticker, main man Mitrovic (£6.9m) is amongst the top two players in the game for offensive stats. On penalty duty and registering five returns in the seven matches played so far, he becomes an easy inclusion.

Bournemouth striker Solanke (£5.7m) is the focal point of the attack. His 12-point haul against Nottingham Forest is a reminder of the potential he can have. On penalty duty and at such an enabling price, the Bournemouth man ranks second on the fixture ticker as well.

Which players have some of the best offensive stats in the game? You can find out here.