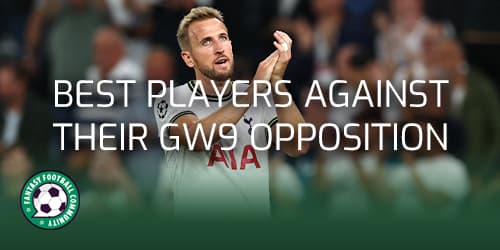 We take a look at some of the best players against their Gameweek 9 opposition. Using previous head-to-head records and underlying stats from the Fantasy Football Scout members area to help us pick out some great FPL picks for the round ahead.

Picking out the best players against their Gameweek 9 opposition could be helpful in making both transfer and captaincy decisions. The more information FPL managers have the better our decisions tend to be in terms of having successful assets in our fantasy teams.

Leicester have some fine fixtures ahead. One of those fixtures arrives in Gameweek 9. James Maddison (£7.9m) has proven to be one of the best Leicester assets to own over the last several seasons. This campaign, the midfielder has already picked up four returns in his first seven matches so far this season.

We can see on the graphic above that Maddison has a fantastic record against promoted teams. The Foxes attacker has managed to return in five of his last matches against promoted teams on the bounce. With a game against a poor Nottingham Forest defence, he could well extend his great recent form.

Liverpool have struggled to meet the high standards set by themselves and fans this season. This poor run has also affected the FPL output of Salah (£12.9m). So far, the Egyptian has managed just three returns in his first six matches played. This has led to FPL managers selling the premium midfielder, but is it time to bring him back?

In the 10 matches Salah has played against Brighton he has managed to return in a whopping eight of them. Those returns, as we can see, include three double-digit-hauls. His exemplary record against Brighton could be an added factor when considering bringing Salah back into our teams.

Staying with Liverpool and another player that could fail to be heavily selected this Gameweek is Trent (£7.4m). The Liverpool defender has also been below his usual high standard of FPL output. Trent has managed just one return in his six matches played so far. The one return he did pick up being a colossal 17-point haul in Gameweek 4.

In his nine matches against Brighton, Trent has returned in over half of them. Those points include four clean sheets and two assists.

Although starting the new season poorly, Man United have been gaining some consistency. The Reds reside in fifth position in the Premier League. With four wins on the bounce in the league, Man United face the tough task of Man City in Gameweek 9.

It is very difficult for any player to have a good record against Man City. Such as the quality of the City defence, it can be uncommon for them to concede goals in general. Midfielder Rashford (£6.6m) has started the season well. In his first six matches the winger has managed to pick up three returns already. We can also see that in the eight matches where Rashford played more than 45 minutes he returned in four of them.

Kane (£11.4m) has started the season in blistering form. The Tottenham striker has continued where he left off last season. After seven matches so far, the England international has returned in every single match excluding one. Those points consist of two double-digit-hauls.

We can see from the graphic above Kane has an excellent record against Arsenal. In the 15 matches against his London rivals, Kane has notched up an incredible 11 returns. Those returns include 13 goals and one assist.

What to expect from Gameweek 9? We answer that in our article here.