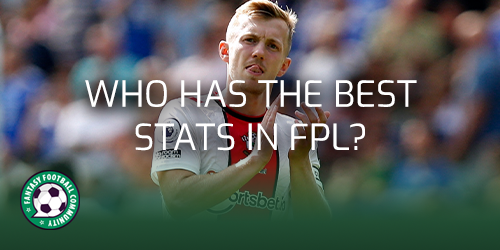 It is now international break. This means we can look back at what has happened so far and reflect upon factors that help FPL managers make decisions. We answer the question, who has the best stats in FPL? Looking at key data points using the Fantasy Football Scout members area, we can see which assets topped things like shots on target, shots in the box and much more.

Stats can play a huge part in the decisions FPL managers make. From captaincy to transfers, using underlying stats to make decisions in fantasy teams is something a large portion of the most experienced FPL managers continue to do.

Southampton have started the season poorly. In their first seven matches they have took just two wins away. £6.5m midfielder James Ward-Prowse could be seen as one of few interesting FPL options they have. However, the set piece taker has managed just two returns in his first seven matches.

Man City sit as one of the best teams in the league for creativity. A huge contributor to that is Kevin De Bruyne. The £12.3m midfielder has started the season spectacularly. In his first seven matches he has returned in five of them. Those returns consist of two double-digit hauls.

Staying with Man City. As well as being one of the most creative teams in the league, they are also one of the best in terms of goals and threat. Again, the main reason for that is Haaland. The £12m striker has returned FPL points in every single match he has played in for Man City.

On top of his fantastic returning rate, Haaland has maintained some elite underlying offensive stats. Amongst all players in the league, he is first for goals scored, second for goal attempts, second for attempts in the box and first for big chances total.

Fulham have started the season better than many fans expected. A huge factor towards that is Aleksandar Mitrović. The £6.9m striker has started the season fantastically. In his first seven matches the forward has picked up returns in five of them. Not only is his FPL output one of the strongest in the league but his stats are too.

Amongst all players in the league Mitrović is second for goals, first for attempts on goal, first for shots in the box and second for big chances created. In addition, The Fulham man does not play a tough match until Man City in Gamweek 15.

The Arsenal striker came into the season as the most owned player in FPL. Although that was the case, Jesus hasn’t met many managers high expectations. In the first seven matches, the Arsenal man came away with four returns. However, although that sounds impressive, three of those returns were six points or less.

Gabriel Jesus has been putting up some great stats. Amongst all players in the league, he is joint third for goal attempts, joint second for attempts in the box and joint third for big chances total. With four returns in seven and maintaining good offensive stats, he could be a great player to hold onto.

Who are the biggest disappointments in FPL so far? You can find out here.