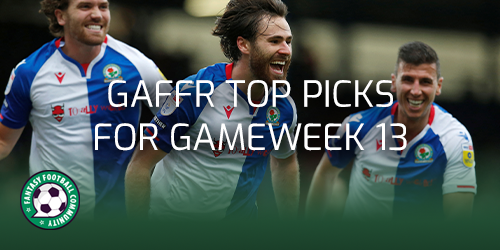 We go through the GAFFR top picks for Gameweek 13 using stats, form and fixture ahead. After a turbulent Gameweek 12, we look ahead to the new round ahead. Gameweek 13 starts on the 4th of October. This means managers have under 48 hours to get their teams ready.

Going through the GAFFR top picks for Gameweek 13 can be hugely beneficial. As fantasy managers we are always looking for players who could do really well in the next round. For that reason, picking out some of the best assets for the Gameweek ahead can be detrimental to chase down the competition.

Blackburn have really impressed so far this season. They are currently 6th in the Championship, meaning they hold a play-off position. Upcoming opponents Cardiff are one of the most inconsistent sides in the division. The Welsh club have now failed to keep a clean sheet in their last five consecutive matches. This could indicate them as a team to target.

Ben Brereton Díaz (£10m) now sits as the fourth highest scoring GAFFR striker. With 66 points the Chilean international is just two points off first place. His points consist of five goals and one assist. Against a leaky Cardiff defence and with a double game week drawing closer, Ben Brereton Díaz makes the top picks for Gameweek 13.

Bristol City might be 13th in the Championship, but they are one of the strongest scorers in the division. That is reflected in their numbers. So far this season, Bristol City have scored two or more in seven of their 11 matches played. An outstanding run of goals and one that should be invested in. They face rock bottom Coventry in Gameweek 13. Coventry have played eight matches and conceded two or more in half of them.

Nahki Wells (£6.9m) has started the season far better than anyone expected, the striker now sits as the second highest scorer in his position category in GAFFR. His 67 points mean he’s just one point behind the joint top two forwards. In the first 10 matches Wells has played, he has scored six goals and created two assists. In great from and against Coventry, it could be time to extend his GAFFR run even more.

Defender Ian Maatsen (£6.1m) has shown he can be successful offensively. The 20-year-old Dutchman has already racked up a goal and three assists so far this season. After a nine-point return in Gameweek 13, his potential was further highlighted. With a great fixture ahead and plenty of attacking potential, a clean sheet against Stoke could well cement the defender on a big return.

After a slow start to the season, the positive results seem to be coming for Luton. That can be said for their defensive ability. In the last two matches Luton have started looking a lot more solid at the back. That has been reflected in the fact they have kept two clean sheets on the bounce. Luton face Huddersfield in Gameweek 13. Huddersfield sit 23rd in the Championship and have won just two matches all season.

Defender James Bree (£6.1m) has continued his fantastic form of last season. The attacking defender has already mustered up two assists this season. This has contributed to him becoming the second highest scoring defender in the game currently. His great fixture and inevitability in returning GAFFR points makes him a top pick for Gameweek 13.

To check how one of the best managers in the game plays GAFFR, you can catch up with our expert interview here.