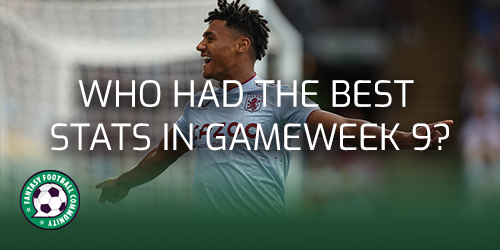 We answer the question, who had the best stats in Gameweek 9? Using the Fantasy Football Scout members area we take a look at some of the players that topped the key attacking stats from the latest round in FPL. Stats will include underlying data points like shots on target, chances created and other important stats to give us an indication of which players did well.

Looking at underlying stats every gameweek can indicate which players did well. Even if the players who topped the stats didn’t return any points. This can be a good sign that the players were close to returning. FPL managers are always on the lookout for assets that could potentially return in the future. This could help with that.

Those impressive stats were more than rewarded. Haaland came away with a massive 23 points against Man United. The forward manage to notch up three goals and two assists, making it his biggest return of the season so far for him.

Unfortunately, similar to the way his season has gone, Watkins failed to translate his stats into FPL output. Returning just two points in Gameweek 9, the forward has also only managed to return twice in the eight matches he’s played so far.

Willock came away with a 10-point return in Gameweek 9. His brilliant distribution stats successfully converted into two FPL assists. Although a very good return, the young attacker has failed to return in every other match he’s played so far this season.

After Bukayo Saka’s fantastic 21/22 FPL campaign, it is safe to say, he could be going under the radar. Gameweek 9 saw Arsenal beat Tottenham 3-1. In that victory, the attacker showed some top stats. Amongst all players he was third for crosses (9), joint second for successful crosses (3) and joint first for chances created (5).

Although having great stats, Saka failed to convert. The midfielder managed just two points. However, with five returns in his eight matches, he has already proven a good FPL asset so far. Putting up some great stats, Saka could gain some new managers in FPL.

What to expect in Gameweek 10? We cover that in our article here.