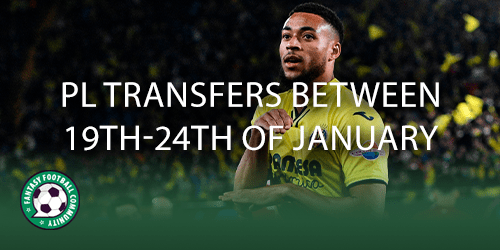 The transfer window is edging closer to its close. Teams can buy, sell and loan players right up until the end of the month to try to improve their squads. For that reason we take a look at the latest Premier League transfers between the 19th-24th of January with the help of Twitter.

Looking at the transfers between the 19th-24th of January can be really helpful to managers. The transfer window can be detrimental for teams looking to improve their squads and this can have a huge affect on Fantasy Premier League. New signings can affect multiple factors like team structure, player minutes and can impact the decisions we make as fantasy managers.

Arsenal continue to be active in the transfer window. It has been confirmed that Jakub Kiwior joins the club on a €25m deal from Italian side Spezia. The 22-year-old can play both a midfield and defensive role but has been predominantly playing in a centre back position.

Aston Villa have once again added a new young attacker to their squad. Jhon Durán has joined Aston Villa on a permanent transfer from North American club Chicago Fire. The 19-year-old plays his football in a striker role and has scored two goals this season.

Villarreal star Arnaut Danjuma looks set for a loan deal to strugglers Everton. His medical was completed on the weekend and the move is set to be until June 2023. Danjuma is winger who can also play as a striker. He bagged six goals and one assist in his latest Champions League campaign.

Wolves has officially signed West Ham centre back Craig Dawson. His deal will last two and a half years. Dawson has vast Premier League experience and his new club will be hoping he can help solidify the backline.

Brighton look set to sign Yasin Ayari from AIK for around €6m. The midfielder looks like he will be flying to England in the next few days to sign his contract and undergo a medical. The 19-year-old talent predominantly plays in a central midfield role where he hit four goals and one assist this season.

Check out the key transfers in FPL ahead of the new Gameweek in our article here.