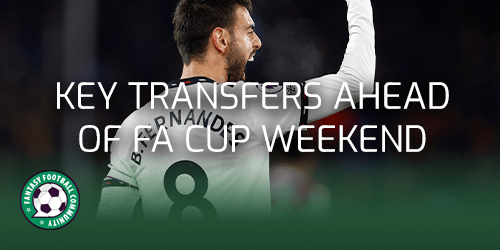 Gameweek 21 ended on Monday evening with the match between Fulham and Spurs. Gameweek 22 kicks off on Friday 3rd February when Chelsea face Fulham, after the FA Cup fourth round. Here we take a look at the transfer market and the key FPL transfers this FA Cup weekend. FPL managers can also check who is popular and who isn’t through the Official FPL website.

The transfers below show the movement of players ahead of the Gameweek 22 deadline. These are the key FPL transfers this FA Cup round so far.

The Premier League’s announced that Manchester United and Leeds will play twice in Gameweek 22 if they both get a result in the FA Cup. This has meant that the Red Devil’s assets are proving popular in the transfer window.

Bruno Fernandes (£9.8m) has now returned in each of the last five Premier League matches. He is also third for creativity and fourth for influence in the ICT index for midfielders. Fernandes has hadover 175,000 transfers in so far and is the most popular transfer target ahead of Gameweek 22 so far.

Fernandes’ Man United teammate Luke Shaw (£5.2m)is the second most popular transfer in. The defender is currently in 21.7% of FPL teams. He has had over 165,000 transfers in since the Gameweek 21 deadline.

Brighton’s Kaoru Mitoma (£5.1m) has now returned in each of the last four matches. In that time he has registered 31 FPL points. His 10 point haul in Gameweek 21 has made him a target for FPL managers. This is true even though he has no scheduled double and could potentially blank in Gameweek 25 depending on the League Cup results. Mitoma has had over 150,000 new managers so far.

Martin Odegaard (£6.8m) scored in the North London derby in Gameweek 20 and registered an assist in Gameweek 21. Over 137,000 managers signed the midfielder this week, ahead of a trip to Everton in Gameweek 22.

Man City’s Joao Cancelo (£7.1m) has failed to feature in either of City’s last two fixtures. He is the second most expensive defender in the game and with a lack of starts is a key sell for FPL managers so far this week. Over 212,000 managers have sold Cancelo ahead of a match against Spurs in Gameweek 22. Man City also play twice in Gameweek 23, so it appears that FPL managers are wary of his lack of minutes of late.

Miguel Almiron (£5.9m) was in fantastic form ahead of the World Cup, returning in returning ini seven of the eight fixtures between Gameweek 9 and 16. However, since the restart Almiron has returned just once with a goal in Gameweek 17. He has since returned four blanks. Almiron has been sold by over 167,000 managers.

Despite Arsenal being in excellent form Gabriel Martinelli (£6.7m) is a popular transfer out this week. Many FPL managers seem to be making the move from Martinelli to teammates Martin Odegaard (£6.8m) or Bukayo Saka (£8.2m). Martinelli has over 146,000 transfers out so far.

Liverpool’s Mo Salah (£12.8m) continues to be high on the transfers out list. Last week he was the second most transferred out, he is currently the fourth most sold player ahead of Gameweek 22. Liverpool have been struggling for consistency recently and Salah has now failed to return in the last four Gameweeks. Over 110,000 managers have parted company with the most expensive player in the game.

Man City’s Phil Foden (£8.1m) is also a popular transfer out. The midfielder missed Gameweek 21 with a foot injury and remains flagged in the game. Foden has been sold by over 95,000 managers so far, as FPL managers look to manage their City investments ahead of their double in Double Gameweek 23.