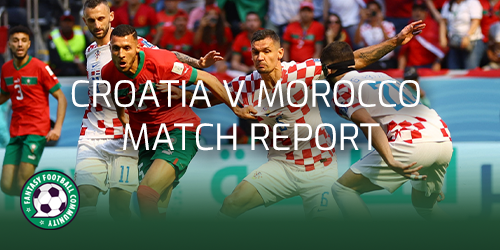 The World Cup continues. Our first Group F match kick off begins today. We take a look at the Croatia v Morocco match. We will highlight the line-ups, pick out the key moments and standout World Cup Fantasy performances during the match.

Borna Sosa (£3.5m) starts the match. Sosa is a popular asset within the World Cup Fantasy community. Managers will be hoping for a clean sheet at the very least. Midfielder Luka Modric (£8.5m) also starts the match.

Some managers will be keeping a close eye on Sofiane Boufal (£6m). The midfielder takes the penalties and could be an interesting asset moving forward. Hakim Ziyech (£7m) will be looking to regain his old form and push Morocco to victory.

I expected Croatia to struggle in breaking Morocco down. Despite this I did expect more from Croatia going forward.

Both defences held up well and moving forward it could be a good idea to invest in both sides defensive assets. Sofiane Boufal came off early and that is a concern considering I was monitoring him.

Who passed the eye test in Group B Matchday 1? Find out with our article here.