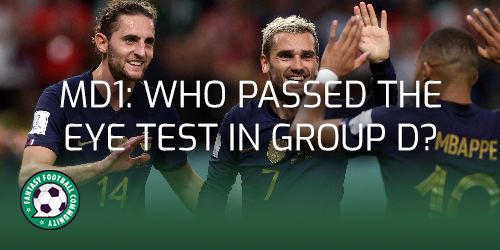 On a day that began with one of the biggest World Cup shocks of the modern era and then a pair of goalless draws, Australia threatened to embarrass France by taking an early lead. However, normality was soon resumed and France end Matchday 1 on top of Group D.

Here are a few players that impressed amongst these four nations.

Around 20% of Fantasy managers selected the marauding Danish wing-back, so his attacking positions were hardly a revelation. Yet seven goals and five assists have arrived in his last 20 internationals – an extraordinary record for someone listed as a defender.

Watching him in Tuesday’s 0-0 versus Tunisia, you see why he scores so often. Often positioned in the final third, he made many successful passes to teammates.

There was also a shot taken while standing near the penalty spot. A right-sided cross came in, Maehle missed and Andreas Skov Olsen soon scored but it was offside anyway.

The Manchester United midfielder is playing in a more advanced position for Denmark, roaming around in their 3-4-2-1 system. Not only did the conductor set up several open play chances, he remains on set pieces and took 11 corners.

He could be a strong pick for the remaining group games, despite the next one being against France.

France and Juventus’ central midfielder bagged a goal and assist during the 4-1 win over Australia. With his position seeing an increase in goal points – now up to seven – it means he brought in a total of 11 for his 1% of owners.

Unlike Argentina, Didier Deschamps’ men knew how to stay calm and turn around a surprise deficit. It’s the true mark of champions, so Kylian Mbappe and co were a free-flowing side by the end. Rabiot made sure to contribute.

He was so involved in attacks that you’d back him to very quickly be holding the record himself. Numerous big chances arrived and, now that Karim Benzema is out injured, the $7.5m price tag suddenly looks incredibly low. Get him in your team, if he’s not there already.

If you want match data that backs up such eye tests, check out Fantasy Football Scout’s Members Area.