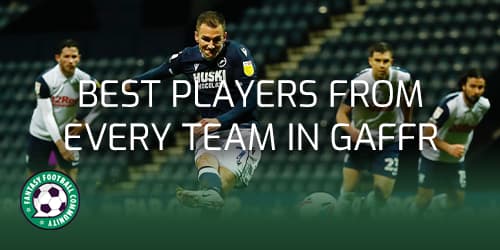 During the international breaks it can be really helpful to look back and reflect on every team in GAFFR. This can also bring some clarity to managers when deciding between players from the same team.

Birmingham are currently 17th in the Championship, and this won’t surprise many fans. Thier inconsistent start means that there is a lack of GAFFR points within the team. However, £6.1m striker Hogan has broken the 50-point mark. with his five goals and one assist so far.

Goalkeeper and £4.6m Ruddy has also provided 51 points. Those points come from his three clean sheets and bonus points.

Blackburn have exceeded the expectations of fans in their fantastic start to the season. They are currently seventh in the Championship. It is the main man and premium striker £10m Brereton who has picked up the highest amount of GAFFR points. His 55 points come from four goals, one assist and bonus points.

Only one other player has been good enough to hit the 50-point mark. That player was midfielder and £5.8m Hedges. Those points consist of one goal and three assists.

There were no high expectations for Blackpool coming into the new season. Their 19th place standing indicates a lack of GAFFR points within the squad. No assets have been able to hit the 50-point mark. The highest scoring GAFFR players are £4.6m goalkeeper Grimshaw, £4.6m defender Connolly and £5.6m striker Yates. All three have been able to muster just 42 points so far.

21/22 Blackpool favourite and £5m defender Ekpiteta has only managed 31 points this season.

Free scoring and the 9th placed Bristol City have been one of the go-to attacks to invest in in GAFFR. Budget striker and £5.4m Conway has struck a high total of 63 points. Those points consist of five goals and two assists. £6.9m and fellow striker Wells also comes out on top with 60 points. His five goals and two assists have made him a very successful GAFFR asset.

The third highest scoring player at Bristol City is favourite and £8.6m striker Weimann. His 56 points consist of three goals and four assists.

Burnley continue to make their way to the top of the Championship. Thier efforts have seen them sit in fourth place currently. Their lack of clean sheets means that their defensive assets have failed to meet GAFFR managers expectations.

£6.3m midfielder Brownhill holds the hefty total of 69 points. Those points came from his four goals, two assists and plenty of bonus points. £9.1m striker Rodriguez has collected 53 GAFFR points for his five goals and one assist. This makes the forward the second highest returner at Burnley.

The Welsh side continue their very disappointing start to the season. None of the Cardiff assets managed to his the 50-point mark in GAFFR. £5.2m midfielder O’Dowda tops the points with his 45 points for his two goals and two assists.

Not far behind O’Dowda is £5.1m defender Romeo on 44 points.

A team that has failed to meet the expectations of GAFFR managers this season. Coventry are rock bottom of the Championship with all of their assets falling well short of 40 GAFFR points. The highest scoring player are forwards £6.5m Godden and £8m 21/22 favourite Viktor. They both mustered 35 and 34 points.

Another team who have failed to hit the heights they did in the previous season. £6m goalkeeper Nicholls has picked up the most GAFFR points with his 44. £8m midfielder Thomas comes second with his 37 points. His returns come from his three assists and bonus points.

Hull started the season better than many thought. However, that great from came crashing down after the Tigers have now lost four matches on the bounce. Only one player broke the 40-point mark. £6.7m striker Estupiñán has collected a haul of 67 points, making him one of the highest scoring GAFFR strikers so far.

Starting the season ok, Luton reside in 11th place in the Championship. 21/22 GAFFR favourite Bree leads the way with his huge 68-point total. The defenders’ points came from his two assists, clean sheets and bonus points.

£7.2m striker Morris also takes an impressive tally. His 58 points consists of six goals. However, a player many GAFFR managers were hoping to do well was £7.4m forward Adebayo, he has picked up just 14 GAFFR points.

This was a team many fans had high hopes for in the new season. Middlesbrough currently sit 22nd in the league, considerably lower than many expected. Although that is the case, their wingbacks have really come through for their GAFFR owners.

£6.1m defender Giles has become a favourite within the community. He has bagged his owners a cool 61 points for his three assists, clean sheets and bonus points. Not far behind is his opposite wingback and £6.5m Jones with his 59 points. Jones has managed one goal, three assists and clean sheets.

13th place Millwall have managed to just tick away, picking up points to see them mid-table. None of their GAFFR assets are yet to break the 50-point mark. This could suggest there are no exciting GAFFR assets to select.

The highest GAFFR returner is £5.6m defender Cresswell. He managed to hit 49 points for his three goals, one assist and one clean sheet. Not far behind is £6.5m goalkeeper Bialkowski with his 47 points. Those points consist of two clean sheets and bonus points.

Although having a tough start to the season, favourites Norwich are now making their way back to the top. They currently sit second in the Championship. £7.8m striker Sargent is the highest scoring Norwich GAFFR player with 64 points. The American has managed to score six goals and create one assist.

£6.6m defender Aarons just about hits the 50-point mark. The pricey £6.6m player has disappointed GAFFR managers with many expecting more than his one goal and three clean sheets. Catching up to his teammate is £11.4m forward Pukki. His slow start to the season has only improved. His three goals and three assists see him hit 48 points.

Although sitting 15th, Preston have been one of the best defensive outfits in the league. That solid defence has aided £5.3m defender Brady to pick up the incredible sum of 72 points in GAFFR.

£4.9m defender Storey takes second with his 57 points, he picked up the bulk of his returns from his goal scored and seven clean sheets kept. In third place is £5.7m goalkeeper Woodman, he has become very popular within the GAFFR community this season.

QPR have continued their great scoring average into the new season. They reside in sixth place. With the highest scoring GAFFR midfielder so far this season, £8.3m Chair has driven his team forward. The midfielder has notched up incredible 87 points. His points come from his three goals, five assists and mass of bonus points.

There wasn’t much expectation from Reading fans going into the new season. However, they have shocked the community as they sit third in the Championship. Topping the points is £6.1m midfielder Ince with 62 points. His returns consist of two goals, one assist and plenty of bonus points.

£4.7m defender Mcintyre has become the second highest scorer within the team. He has collected 48 points for his one goal and four clean sheets. £7.6m striker Santos João has only scraped 31 GAFFR points so far this season.

Rotherham are another team who had low expectations after promotion to the Championship. They are currently eighth in the league. £4.8m defender Wood has hit a massive 75 points. That total means that Wood sits as the highest scoring defender in GAFFR so far. His points come from an impressive four goals, one assist and four clean sheets.

£5.8m midfielder Ogbene has become one of the best value enablers in GAFFR this season. His 61 points come from his four goals and bonus points.

Fans didn’t know what to expect from Sheffield United but sitting first in the Championship was not one of them. Two players lead the pack with a huge 71 points. £6.2m defender Ahmedhodzic remains one of the highest scoring defenders in the game. His returns consist of three goals, one assist and six clean sheets.

£7.2m midfielder Bolin Berge joins his teammate at the top from his three goals and three assists. £7.7m midfielder Ndiaye also breaks the 60-point mark with his 66.

Stoke are currently 14th in the Championship. Their inconsistencies mean no assets have hit the 60-point mark. £6.7m midfielder Baker sits top of the pile with his 57 points for his four goals and two assists. Defender and £5.1m Wilmot hits 56 points for his two goals and three clean sheets.

Newly promoted side Sunderland have provided some thrilling performances this season. Thier fantastic start has seen them fifth in the league. £5.9m midfielder Clarke has become the highest scoring Sunderland GAFFR asset. His 66 points consists of three goals and four assists.

Another great value asset is £6.7m striker Stewart. He has returned 59 points from his five goals and three assists so far. Sunderland have become one of the best value teams amongst every team in GAFFR.

The Welsh side sit 16th in the league. Thier below average start to the season has meant none of their assets have hit the 60-point mark. £5.2m defender Manning becomes their top asset. His 57 points consist of two goals and three clean sheets.

Popular asset from last season and £8.7m striker Piroe is the only other player within the squad to hit 50 points of more.

Watford continue their underwhelming start to the new season, sitting 10th in the league. None of their assets have broken the 60-point mark. £7.1m midfielder Sema is the highest scoring GAFFR player from Watford. He has collected 57 points for his one goal and three assists.

Well behind his teammate is £9.6m striker Pedro. He has only managed 49 points in GAFFR due to his two goals and two assists. A player many had high hopes for was £10.9m midfielder Sarr. The huge talent has only racked up 40 points so far this season.

Another team to hit far below expectations is West Brom. They have found themselves 21st in the league. The only asset to exceed 60 points is £10.6m midfielder Wallace. His total comes from his three goals and one assist.

Fellow midfielder £9.6m John Swift became one of the most popular assets in the game last season. He has totalled 55 points. This makes him West Brom’s second highest scoring player. West Brom become one of the most disappointing teams amongst every team in GAFFR.

Although the newly promoted team have performed better than many expected, their assets aren’t standing out. None of their players have managed more than 50 points in GAFFR. £6m striker Keane comes top with his 44 points.

You can check out some of the biggest disappointments in GAFFR so far here.