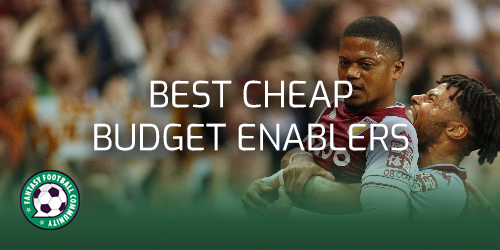 Vital to every FPL squad is budget enablers. Players who bring points at a low price, allowing more money to be invested into premium assets such as Mohamed Salah, Kevin De Bruyne and Trent Alexander-Arnold.

In the past, FPL heroes have been made of John Lundstram, Aaron Wan-Bissaka, Odion Ighalo, Patrick Bamford and most of Leicester’s title-winning side of 2015/16.

Here is a look at the best options as we head towards Gameweek 9.

Just when Nathan Patterson (£4.1m) looked set to overtake Neco Williams (£4.1m) as the community’s preferred cheap defender, he was stretchered off during Scotland’s match. According to national boss Steve Clarke, “it doesn’t look too good.”

With West Ham’s Emerson (£4.0m) not looking like a nailed-on starter, it leaves Williams as the default choice. Although Nottingham Forest aren’t defending well, the wing-back at least offers an extreme attacking threat. He leads the way for goal attempts amongst defenders whilst ranking high for expected goal involvement (xGI).

Price drops move Tyrone Mings and James Justin down to £4.3m. A serious injury to Diego Carlos has put Mings back into Aston Villa’s first XI and he duly collected nine points last weekend against Southampton.

Despite already providing a pair of assists this season, Justin is hampered by playing for Leicester. They’ve conceded 22 goals from seven games, meaning he is only on ten points. Perhaps more attacking teammate Timothy Castagne (£4.4m) is a better punt for their positive fixture swing.

Recent Foxes departure Wesley Fofana takes a £4.4m price into Chelsea’s starting line-up. For those managers struggling to squeeze Reece James into their squad, big-money signing Fofana offers a cheap way into one of the league’s best defences.

Moving on to midfield, where Fulham’s Andreas Pereira (£4.6m) is in over 26 per cent of squads. A nailed-on attacking midfielder at a low price, he is soon to face Bournemouth, Aston Villa and Everton at home. However, Gameweek 8 suggests he’ll now have to share set-piece duties with Willian.

Staying with west London budget enablers, Josh Dasilva (£4.6m) rose in popularity after scoring in the first two matches. Yet they came from an expected goals (xG) tally of 0.07 and, indeed, he hasn’t scored since. Furthermore, he can’t even be relied upon to start Brentford games.

One man who quickly lost popularity and ownership was Leon Bailey (£4.7m). A strong pre-season led to his presence in 1.5 million early squads, only to blank and then be benched by Gameweek 2. It’s turned around though, as Bailey has started Villa’s last three and scored versus Man City.

Should he continue to start, these upcoming fixtures offer great potential for more Bailey goals.

There’s not a lot to choose from in this price range, to be honest. Pedro Neto (£5.1m) was another name hyped in pre-season but he is yet to register either a goal or assist, despite a team-leading xGI of 1.87. But dropping £0.4m in price may lower the risk of owning Neto from Gameweek 11’s trip to Nottingham Forest.

Someone who has already made this journey is Morgan Gibbs-White (£5.5m), who Steve Cooper’s side signed from Wolves in late August. During last season’s loan spell at Sheffield United, he ended on 12 goals and ten assists.

As seen above, the number ten even seems to be playing as a forward. Gibbs-White’s average position has been the most advanced in two of Forest’s last four outings.

Those unable to buy James Maddison might want Kiernan Dewsbury-Hall (£5.0m) as an alternative. The Leicester midfielder scored twice in pre-season before netting in Gameweek 1 versus Brentford.

Then there’s Demarai Gray (£5.5m), who was a frustration last season but is nailed-on for Frank Lampard’s Everton. A goal arrived in Gameweek 3 and fixtures are good heading into the World Cup break.

With strong candidates competing for just three forward slots, FPL managers may not be considering any sub-£6.0m options.

Some bargains could be found, such as Bournemouth’s Dominic Solanke (£5.7m). According to Fantasy Football Scout’s Season Ticker, they have the best fixture run until the World Cup. Therefore, grabbing the guy who scored 29 times for them last season makes sense.

Elsewhere, Brennan Johnson (£5.9m) has penalty duties and two goals at Nottingham Forest, whilst Patson Daka (£5.7m) hauled against Brighton in Gameweek 6. It remains to be seen whether his starting spot is secure enough to be one of the budget enablers.

They are competing for the same place but are about to begin a wonderful set of fixtures.

Meanwhile, Gameweek 9 Wildcarders may want to check out our look at the best current defenders, midfielders and forwards.