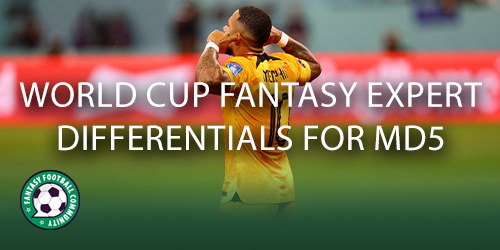 The template appears to be taking form and although there are some risks going against well owned players, there is also huge reward when backing successful differentials. Looking at World Cup Fantasy expert differentials for Matchday 5 can help get us ahead of the competition.

Brazil face Croatia in Matchday 5 and will be favourites to win the match. They can score goals and they showed that in their 4-1 win over South Korea. Finding cheaper options with offensive potential in good teams is proving more and more difficult as the tournament progresses.

One player that could standout around that price is Lucas Paqueta (£7m). The midfielder has proved he can score as he did in his previous match and his creativity is also impressive. Paqueta managed to create three key passes in his previous match, reflecting his potential. Brazil could go far in the World Cup so Paqueta could be a long term option too.

England have kept three clean sheets in their four World Cup matches so far. For that reason it could be wise to invest in the defence, even with a match against France next up. France heavily rely on Kylian Mbappe, so if England can keep him quiet, the potential for the clean sheet is certainly there.

Harry Maguire (£5.5m) has below 10% ownership. England are very strong when it comes to set pieces, and part of that is due to the goal threat that Harry Maguire poses from them. After scoring and creating an assist in the group stages already, Harry Maguire may just be the most appealing centre back in World Cup Fantasy.

Portugal continue to impress in their World Cup campaign and although defensively ropey at times, it could be worth investing in their offensive defenders. One of those defenders is Raphael Guerreiro (£5m). Finding nicely priced defenders with attacking threat could prove difficult but Guerreiro could offer that.

Guerreiro has been a fantastic asset in UCL Fantasy over recent years and his form seems to have translated into his World Cup tournament. The left back managed to both score and assist against Switzerland and could have huge potential in Matchday 5, if he starts.

Netherlands managed to put three goals past USA in the round of 16, a team who managed to keep a clean sheet against England, the World Cup’s highest scorers so far. One way into the offensive line could be striker Memphis Depay (£8.5m).

Depay is fully fit after recovering from an injury and regaining fitness during the group stages. His form is on the up and that could be reflected in the fact he created an assist in his first start and scored a goal in his second start. Netherlands face Argentina next. The South Americans have allowed chances and Depay could well capitalise on them.

To keep up to date with all of our World Cup Fantasy articles, take a look here.