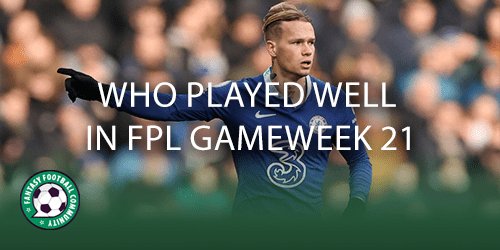 We take a look at who played well in FPL Gameweek 21. With a focus on the matches played so far, we highlight some of the standout performances of the current round, whether they returned in Fantasy Premier League or not.

Underlying stats will always be very useful for FPL managers in their chase for success. However, looking at who played well in FPL Gameweek 21 could be a huge factor when looking at potential FPL assets to bring into our fantasy teams moving forward.

One of the biggest fixtures of the season arrived this week as we saw a huge clash between Chelsea and Liverpool. Both teams sit mid-table and a win for either side would have been a huge boost but it wasn’t to be as the game finished 0-0.

Chelsea lacked creativity and penetration but there was one thing that Chelsea fans would have been excited about, Mykhalio Mudryk (£7m) made his debut in the match. Although featuring for just 35 minutes, the Ukrainian was exciting, bullish and his incredible pace was there to be seen as he whistled past players. Mudryk was brilliant in the short period he played but even with two big chances, failed to convert his performance into FPL points.

Nottingham Forest went into their match against Bournemouth with a great run of form behind them. In contrast, their opponent were in a torrid period of results. The away side ran away with just the point due to their 1-1 draw.

One player that stood out was Morgan Gibbs-White (£5.5m). The Nottingham Forest midfielder has been maintaining some fantastic stats and really showed what he can do. Morgan Gibbs-White was fantastic throughout the match. He looked like the key creator and that was reflected in the fact he hit seven key passes in the game. Picking up just two points in FPL this week he failed to convert his performance into a return.

West Ham have been struggling to maintain any sort of consistency this season. In fact, their poor form has seen them stuck in and around the relegation zone for the majority of the season. They played another struggling team in Everton this week.

The Hammers won the game 2-0 and it was a great overall showing but Jarrod Bowen (£8m) spearheaded a top performance. The midfielder caused major problems for Everton with his pace and power and took the spoils, scoring two goals and hitting a massive 16-point haul in FPL.

Brighton faced a struggling Leicester in Gameweek 21 whilst in a brilliant run of scoring form. The game ended in a 2-2 draw and it was a thrilling affair. There was plenty of great performances during the match and from both sides.

Kaoru Mitoma (£5m) put on a show against Leicester and after three back-to-back returns before the match reflected great confidence. The Brighton midfielder was an exciting watch and his skill and turn of pace continuously penetrated the Brighton backline. He scored an amazing goal whilst also creating two key passes. Kaoru Mitoma hit 10 points in FPL this week and it should have been more.

Check out what the community were talking about ahead of the Gameweek in our article here.