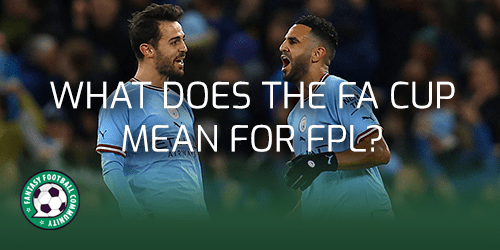 The FA Cup fourth round will be played on the weekend of the 27-30th of January. Here we take a look at what the FA Cup means for FPL and how managers should plan for it.

The FA Cup Third Round

The FA Cup third round resulted in eight Premier League sides being knocked out of the competition.

In addition Liverpool v Wolves and Cardiff v Leeds ended in draws. These sides therefore required a replay. The reply resulted In Wolves being knocked out of the competition.

The FA Cup Fourth Round

The Premier League teams have the following FA Cup fixtures:

As a result of the fourth round Arsenal or Man City and Brighton or Liverpool will definitely be out of the cup as they are all Premier League ties.

What impact does the FA Cup have on FPL?

There are a couple of impacts of the FA Cup on FPL. Firstly it adds to the number of fixtures that a team has to play, especially in the busy January period. This means FPL managers need to be more mindful of rotation around the FA Cup and the league.

The outcome of the fourth round of the FA Cup will also impact rescheduled fixtures. If Man United and Leeds have a result in their FA Cup ties that does not require a replay, FPL managers will have Double Gameweek 22.

What do we know about Gameweek 28 so far?

The following fixtures will definitely be played in Gameweek 28:

The other fixtures in Gameweek 28 will only be on if both teams exit the FA Cup.

The fixtures in Gameweek 32 will depend on what happens in the fourth and fifth rounds of the FA Cup as well as the Quarter-Finals of the competition.

Brentford v Aston Villa and Crystal Palace v Everton will definitely be on regardless of what happens in the later rounds of the FA Cup. This is because all four teams are already out of the competition.