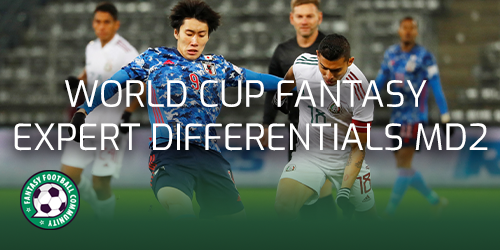 The template appears to be taking form and although there are some risks going against well owned players, there is also huge reward when backing successful differentials. Looking at World Cup fantasy expert differentials for Matchday 2 can help get us ahead of the competition.

Wales forward Gareth Bale (£8m) has become a legend for his country. His fantastic career has seen him hit some of the highest heights in football with former club Real Madrid. That success has continued through the latter stage of his career.

The biggest contributing factor in Wales’s qualification to the group stages was Gareth Bale. Bale hit six goals and three assists in his seven World Cup qualifiers. The Welshman also takes his sides penalties and free kicks, which adds even more routes to points.

Qatar put on one of the worst performances of the tournament so far raising questions as to if they were good enough to get any points from their group stage matches. For that reason, it could be beneficial to invest in the Senegal attack.

With star man Sadio Mane now out of the World Cup, it could be worth looking to Ismaila Sarr (£6.5m). The forward has proved to be a talent. Sarr plays his football in the English Championship. In his current domestic campaign, Sarr has managed six goals and four assists. Not only that but without Mane, has the potential to take penalties.

Poland have become a team many have chosen to ignore in World Cup Fantasy. This could be due to the fact they have been pitted against Mexico and Argentina in their group. However, they face Saudi Arabia in Matchday 2, which could mean the appeal of the Polish attack increases.

The standout option for Poland is without a doubt Robert Lewandowski (£10m). The striker has maintained some of the best offensive numbers in world football over the years. As well as taking penalties for Poland, he created nine goals and four assists in his nine World Cup qualification matches.

Japan have been grouped with Germany, Spain and Costa Rica. They face Costa Rica in Matchday 2. Japan have been increasingly underrated over the years, but their performances suggest they are not a team to be written off.

One of the ways into the Japan attack could be midfielder Daichi Kamada (£5.5m). At such a low price in a bracket that is struggling for cheaper options, Kamada could be a fantastic option. For club, Kamada has already notched up seven goals and three assists in his 13 league matches. In addition, in his latest four World Cup qualifier he bagged three goals from the four matches he played.

Serbia through up one of the biggest surprises in the World Cup qualifiers as they nipped Portugal to first place in the groups. Their increasingly progressive form has turned them into real dark horses of the World Cup and after a tough first game against Brazil, face Cameroon next.

Aleksander Mitrovic (£7m) comes in at a fantastic price. The in-form striker broke Championship records last season after he scored a whopping 43 three goals whilst also creating seven assists. That fantastic form continued in his current Premier League campaign as he has already racked nine goals in his 12 matches.

Ghana have shown offensive ability in their recent matches. The African side have a meeting against South Korea in Matchday 2. Although South Korea have shown strength, they have also shown the ability to leak goals.

One of the cheapest and most effective ways into the Ghana attack could be midfielder Mohammed Kudus (£6m). Kudus has lit up the Champions League during his recent campaign with Ajax. The African managed an impressive four goals and two assists in the six matches he did play.

Are you still struggling to keep up with all of the key dates and deadlines in World Cup Fantasy? Check out our article to help with that here.