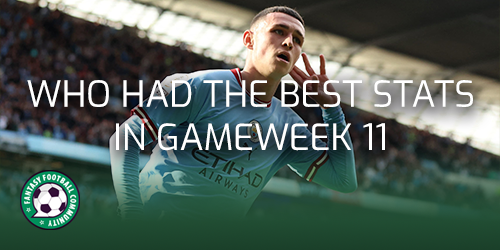 We look at who had the best stats in Gameweek 11. Using the Fantasy Football Scout members area we take a look at some of the players that topped the key attacking stats from the latest round in FPL. Stats will include underlying data points like shots on target, chances created and other important stats to give us an indication of which players did well.

Looking at who had the best stats in Gameweek 11 can indicate which players did well. Even if the players who topped the stats didn’t return any points. This can be a good sign that the players were close to returning. FPL managers are always on the lookout for assets that could potentially return in the future. This could help with that.

West Ham have struggled to maintain consistency this season. For that reason, the Hammers have seen a shortage of clean sheets. This has had a knock-on effect on defender Aaron Cresswell’s (£4.8m) FPL potential. The left back has managed just two returns all season.

Gameweek 11 saw the defender rack up some great distribution stats. Amongst all players in the league, he was first for crosses (11) and joint first for chances created (four). Although that was the case, Cresswell failed to convert his stats into FPL points.

Man City’s relentless pursuit of league leaders Arsenal finally came to a halt in Gameweek 11. Opponents Liverpool ran away with the three points in their 1-0 win. However, midfielder Phil Foden (£8.3m) looked promising. So far this season, Foden has managed six returns in his first 10 matches. Two of those matches saw the young attacker hit two double-digit hauls.

Amongst all players in the league Foden was joint third for crosses (nine), first for successful crosses (five) and joint second for chances created (two). Again, although his stats were fantastic that failed to translate into his FPL performance. With a blank Gameweek ahead but good fixtures afterwards, managers could be looking to bring Foden in.

West Ham’s New signing Lucas Paqueta has made an impact on West Ham. Unfortunately, many within the FPL community have not seen enough to invest in the midfielder. Paqueta has managed just one attacking return in all of his matches so far.

Amongst all players in Gameweek 11. Paqueta was first for total attempts on goal (eight), joint second for shots in the box (four), and joint first for headed attempts on goal (two). The West Ham man also failed to make good on those stats with his two-point FPL return.

Tottenham maintain one of the best home records of the season so far. One of the biggest contributors to that great from is Harry Kane (£11.4m). The striker has now managed his ninth consecutive return in a row. This has made him the second highest scorer in FPL currently.

The relentless form of Kane continued in Gameweek 11. Amongst all players in Gameweek 11, Kane was joint second for attempts on goal (seven), joint first for shots in the box (six) and joint second for big chances created (two). Kane was rewarded for his great stats with a nine-point return against Everton. His points consisted of one goal and three bonus points.

Are you using the free hit in Gameweek 11? You can check out our best free hit team here.