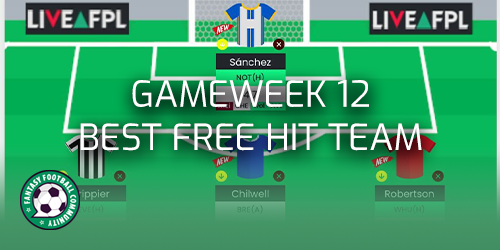 With a new Gameweek upon us we take a look at the free hit chip. Using the Fantasy Football Scout members area we can use the help of the season ticker and underlying stats to determine the Gameweek 12 best free hit team.

We can see that Brighton, Southampton, Newcastle, Aston Villa and Bournemouth rank the top five teams for having the easiest fixtures.

We can see that Man City and Arsenal do not play in Gameweek 12. We can also see that West Ham, Tottenham, Man United, Brentford and Everton rank the bottom five teams for having the toughest fixtures.

Using the Live FPL website we can use one of its fantastic tools available to plan transfers weeks in advance. Not just this, but we can also create team drafts to plan for using a chip. Take a look at the best free hit team for Gameweek 12:

Amongst all teams this season, Brighton rank in the best six teams for shots in the box conceded, total attempts conceded, shots on target conceded and several other defensive stats. They face Nottingham Forest in Gameweek 12. The newly promoted side are the joint second worst for goals scored, the third worst for attempts on goal and the third worst for big chances total.

Considering the factors above it could be beneficial to invest in Brighton goalkeeper Robert Sanchez (£4.7m). He is paired with Leicester Goalkeeper Danny Ward (£4.1m). Ward will likely sit on the bench just in case Sanchez fails to play.

Newcastle have improved hugely defensively this season. Defender Kieran Trippier (£5.7m) could be seen as a reflection of that. He currently sits as the second highest scoring FPL defender in the game. The set piece specialist has hit five returns on the bounce and offers multiple routes to points, as well as having a great fixture ahead.

Chelsea have now kept four consecutive clean sheets in their last four matches. The Blues are starting to solidify at the back and investment could be wise. Wing back Ben Chilwell (£5.8m) could be a very good option for the match ahead. The Englishman has shown attacking potential in the past and after coming back from injury, we could well see that great previous form again soon.

Another team that have own some defensive improvements lately is Liverpool. The Reds managed to shut out the best attacking side in the division, Man City, the only side to stop them from scoring this season in the league. Defender Andy Robertson (£6.7m) is now fully fit. Robertson has also offered managers great FPL potential in the past. With improving form, the Scotsman could be a good option for Gameweek 12.

Brighton defender Lewis Dunk (£4.6m) and Newcastle defender Sven Botman (£4.4m) are two very good bench players. Both play for good defensive units and both will be ready to replace anyone that may not start.

Nottingham Forest are one of the worst defensive sides in the league. Amongst all teams they are the second worst for goals conceded and the worst for shots on target conceded. For those reasons, it could be wise to include Brighton midfielder Leandro Trossard (£6.9m). Liverpool midfielder Mohamed Salah (£12.7m) has hit good form recently. With four goals in his last two matches in al competitions, he also takes the captaincy armband.

Crystal Palace midfielder Wilfried Zaha (£7.5m) also makes the team. The penalty taker faces a struggling Wolves side in Gameweek 12. Wolves have conceded two or more goals in three of their last four matches played. Amongst all teams, in last six matches, Brentford rank the third worst for goals conceded, the fourth worst for attempts on goal conceded and the fourth worst for big chances conceded. This could be enough to bring in the returning to form Chelsea midfielder Mason Mount (£7.7m). The Chelsea man has now managed two back-to-back double-digit hauls of 12 and 15 points.

Fulham midfielder Andreas Pereira (£4.6m) has shown great attacking potential this season for his price. He will only come on if one of the starting line-up fails to play.

Bournemouth striker Dominic Solanke (£5.7m) has proved a lot of the doubters wrong. The forward has now managed three returns in his last five matches. Two of those returns were 12-point hauls. The penalty taker faces Southampton in Gameweek 12. The Saints have failed to keep a single clean sheet this season and could be a great team to target.

Fulham man Aleksander Mitrovic (£6.7m) returned from his injury in Gameweek 11. That return was met with a goal. This season Mitrovic has maintained some of the best offensive stats in the league. Tottenham have a difficult fixture against Man United ahead. However, Harry Kane (£11.4m) has proven relentless form since Gameweek 2. In fact, not only is he the second highest scoring player in FPL currently, but he has also returned in every match since Gameweek 2.

What should we expect from Gameweek 12? We take a look at that right here.