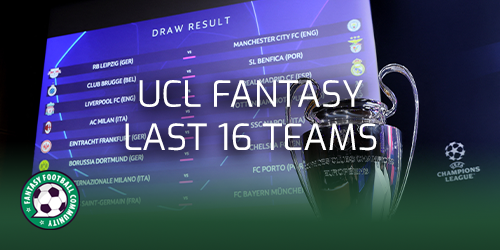 With the group stages now complete, the wait for the Champions League last 16 draw is over. We overview the UCL Fantasy last 16 teams. Looking at which teams drew who and briefly highlighting team form or players involved in the matchups.

The UCL Fantasy last 16 teams have now been drawn into their fixtures. Managers can now start re-building their squads for the last 16. Knowing the fixtures can help us decide which teams and players to invest in early on.

The first English v German fixture to be drawn. Man City have shown relentlessness through their domestic campaign and will go into this as firm favourites. However, even though Leipzig did struggle to maintain consistency at the beginning of their season, they are improving.

Both sides have been hugely impressive in their group stage campaign. Club Brugge’s defence stood strong without conceding a goal in five of their six matches. Benfica on the other hand have shown some of the best form in Europe this season whilst also drawing both of their matches 1-1 against French giants PSG.

It may feel too early for a tie this big but football fans around the world won’t be complaining. Last season’s final looks set to be repeated in a seismic battle between two of Europe’s biggest clubs. Liverpool have started their season questionably whilst Real Madrid have only lost one competitive match all season.

Successful UCL Fantasy assets and midfielders Mohamed Salah of Liverpool and Vinicius Junior of Real Madrid will be hoping to continue their fantastic form.

Both teams have great squads full of wonderful players but have shown that they can both be inconsistent at times. There may not be a clear favourite here but what we can be sure of is two fantastic matches full of surprises.

Frankfurt made a last dash in the group stages to progress. The German side have shown inconsistencies this season whilst Napoli have lost just once in all competitions all season. Fantasy managers eyes could be fixated on the in-form Napoli man Khvicha Kavaratskhelia.

Chelsea started the season in form that didn’t meet their usual high standards. After replacing their former manager with Graham Potter there has been noticeable improvements. Dortmund, like Chelsea, have also missed key players from injury so when all of those players inevitably return, it could be a great match for fans.

Inter showed huge fight in their journey to qualify. They faced a group with both Bayern and Barcelona and came out on the other side unscathed. They face an increasingly strengthening Porto side who will not be easily swept aside.

In what could be undoubtedly the biggest clash of the last 16, we see two European giants face off. PSG have incredible talent going forward in Lionel Messi, Neymar and Kylian Mbappe whilst the German giants have built a well drilled machine.

Keep an eye out for even more UCL Fantasy articles during the break, here.