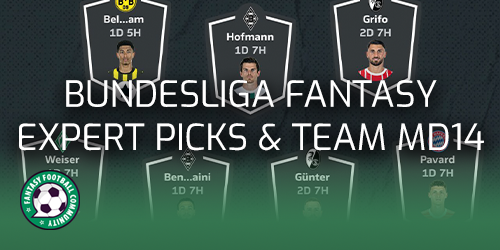 With a new round ahead, we look at Bundesliga Fantasy Matchday 14 expert picks and team. @FPLGunnersaurus (Jay) joins us to give his three top picks for the Matchday ahead. In addition, he also shares his squad going into the new round with his general thoughts.

Twitter is full of the most experienced fantasy football players around. Those managers can be some of the best people to look to when trying to gain clarity when making their own decisions within their teams. Seeing Matchday 14 expert picks and team can help for the round ahead.

Choupo-Moting, yes that ex-Stoke City flop, is currently in the form of his life and spearheading the goal machine that is Bayern Munich. With five goals and two assists in his last four games the Cameroon international is red hot and front and centre in boss Nagelsmann’s front-line thinking. At 5.5m, Choupo-Moting is even a better budget gem than Niclas Füllkrug right now, whose Werder Bremen side travel to the Allianz Area on Tuesday evening.

Bremen tend to fare well on their travels, but against a Bayern team with a huge home expected goals of 3.09xG, even Bremen could get beaten well here. Bayern’s final game before the World Cup is away to bottom club Schalke too, so the forward is an easy hold into Matchday 15. I never thought I would ever be recommending Choupo-Moting but here we are – target Bayern players for these last two Matchdays and this journeyman is your cheapest way to do so.

Mönchengladbach boss Daniel Farke welcomed Hofmann back into the fold on Friday night after the German internal recovered from a shoulder dislocation injury. It did not take long to show why the coach started him over club captain Lars Stindl, rifling in a goal after only four minutes and returning 13 points in Bundesliga Fantasy. In the 11 games Hofmann has played this season, he averages 9.45 points, and has hit double-digit fantasy returns four times. This included a 28-point haul in Gladbach’s 3-0 home win over RB Leipzig, where he netted twice.

Gladbach travel to Bochum Tuesday night and Hofmann makes for one of the best star midfielder options. Bochum are second worst for expected goals this season at 2.09xGA (1.89xGA at home) and whilst Gladbach’s xG isn’t anything to shout about, Hofmann should do well here. Welcome Hofmann back into your teams if you didn’t already pick him up ahead of his star display last Friday night.

Known last season as part of the ‘Saša-Sosa’ combination Sosa hasn’t missed former striker Saša Kalajdžić when it comes to whipping the ball in from the left and grabbing the assist. The Croatian is Stuttgart’s top assister so far this season with four assists, and he’s starting to come into form again in terms of Bundesliga Fantasy returns.

The left-back has retuned big hauls of 17 points, 16 points and 19 points in home games this season. You may be surprised to discover the 17-point return came in a 1-2 home loss, which just goes to show, even in defeat Sosa is a fantastic option. Die Schwaben host Hertha Berlin Tuesday night who have lost their last two away games and with Stuttgart having won their last two home games, signs point towards another three points at home this time around too. Sosa is one of the best picks this matchday, and perhaps the best star defender option full stop. Assist yourself here and bring him in.

Check out all of our most recent Fantasy Bundesliga articles, all in one place, right here.