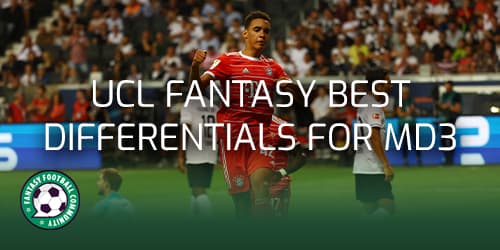 We look at the UCL Fantasy best differentials for Matchday 3. The new Champions League Fantasy round is coming quickly. Here we try and find some of the best lowly owned players within the game ahead of Matchday 3

Finding the UCL Fantasy best differentials for Matchday 3 can be key to gaining rank early. For that reason, it’s really important to find some of those hidden gems within the game that most won’t select. This way we have an edge over our competition.

Bayern face Plzen in Matchday 3. Although dominant in their own league, they have failed to perform to the same standard in the Champions League. After losing both games in Matchday 1 and Matchday 2 comfortably, they have also conceded a massive seven goals so far.

Jamal Musiala has just 5% ownership within the game. The £7m midfielder comes in at a cheaper price than his teammates Sane (£9.1m) and Mane (£10.5m). This means he is one of the cheapest routes into the Bayern attack. The German international has managed six goals and three assists so far, outperforming both of his team mates already mentioned.

Bayern play in the early kick-off. This means we receive the line ups before the UCL Fantasy deadline. If Musiala is in the starting line-up, managers should be tempted to include the midfield ace in their fantasy teams.

Sporting have the tendency to be a team UCL Fantasy managers are interested in. Their cheap value assets have become popular, especially as of late. The Portuguese side have started their Champions League campaign very well. In their first two Matchdays, they have won both, whilst also scoring five goals.

Midfielder Marcus Edwards (£7.2m) has shown fine form lately. In his domestic league he has picked up three goals and two assists so far. That top form carried into Matchday 1 against Frankfurt, where he picked up 14 points for his goal, assist and player of the match award. Sitting at just 1% ownership and against a Marseille struggling for form in the UCL, Edwards could be a fantastic differential.

Tottenham midfielder Son (£10.5m) has really struggled to hit the heights of his previous campaign. The Korean star racked up as many goals as Salah domestically, sharing the golden boot award with the Egyptian in the Premier League. However, could his form be on the turn?

In Tottenham’s previous match against Leicester, Son managed a second half hattrick to silence his doubters. The midfielder then went on to score back-to-back goals for his international team. At just 2% ownership, Son faces a match ahead against Frankfurt. The German team were comfortably beaten by Sporting in Matchday 1. Against an inconsistent team, Son could become a fantastic potential for Matchday 3.

Celtic remain absolutely dominant in their domestic league. However, that elite team form is yet to be seen in the Champions League. After being dismantled by holders Real Madrid in Matchday 1, the Scottish side showed fight in their 1-1 draw in Matchday 2. They face Leipzig in Matchday 3. The German side have conceded one of the highest goal averages in comparison to the rest of the Champions League participants. With just one clean sheet in their last five and 13 goals conceded in the same period, they look a team to target.

Jota (£6.5m) comes in at just 1% ownership within the game. The Portuguese attacker has shown exemplary form since the new season started. In his first seven matches domestically, Jota has produced four goals and four assists. This led to eight goal contributions in seven matches played. The Celtic attacker didn’t return any significant points in Matchday 1 but came away with the player of the match award in Matchday 2.

In the 11 matches Salzburg have played so far, they have scored two or more goals in a huge eight of them. Their great goal scoring ability was proved in Matchday 1 and Matchday 2 when they scored against both AC Milan and Chelsea. Top of their domestic league, they’ll be looking to get back to winning ways against Dynamo Zagreb in Matchday 3.

Noah Okafor (£7.5m) sits at just 1% owned in the game. In the eight matches he has played, Okafor has scored five and created one assist. That form has transpired into his Champions League campaign. The Swiss attacker managed to score against Chelsea and AC Milan, scoring his sides only goals. With a seven-point return in both of his matches already, Okafor could be a great differential for Matchday 3.

There you have it. Some of the best differentials for Matchday 3.

A reminder that if you haven’t checked out our top picks in UCL Fantasy for Matchday 3, you can catch up here.