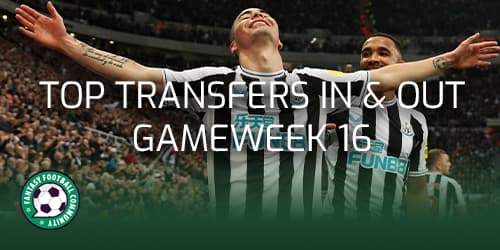 Watching the transfer market is one of the biggest parts of FPL management. Ensuring that your players don’t drop in price and cost you team value is key. We assess the transfer market and the most popular transfers ahead of Gameweek 16. The Official FPL website offers lots of information, including for the round ahead.

Players rise and fall in price in FPL based on the number of transfers in or out they have. Here we look at who are the most popular transfers ahead of Gameweek 16 deadline.

The in-form Newcastle duo of Miguel Almiron (£5.7m) is the most popular transfer in this week. Almiron has over 380,000 new managers, on the back of yet another goal in Gameweek 15.

Erling Haaland (£12.2m) was rested during the League Cup in midweek. However, the forward returned from injury in Gameweek 15 coming off the bench to score Man City’s winning penalty.

Liverpool midfielder Mo Salah (£12.7m) scored a brace in Gameweek 15, as a result he is the third most transferred in player ahead of Gameweek 16.

Brighton midfielder Leandro Trossard (£6.9m) is the forth most transferred in player this week. Only two midfielders in the game have returned more FPL points than Trossard this season and, with a fixture against Aston Villa coming before the World Cup, he continues to look like a good asset for managers.

Aleksandar Mitrovic (£6.8m) has been ruled out of Gameweek 16 through injury. Mitrovic also missed Gameweek 15 with a foot/ankle injury. The forward is the most popular transfer out this week with over 401,000 managers have parted company with the striker this week.

Phil Foden (£8.5m) was benched in the last three Premier League matches aas well as in the League Cup. This has made him the second most transferred out. Foden has been sold by over 361,000 managers ahead of a match at home to Brentford on Saturday afternoon.

Diogo Dalot (£4.8m) picked up his fifth yellow card of the season in Gameweek 15. This means that the defender is suspended in Gameweek 16. As a result 298,000 managers have sold the defender ahead of the deadline.

Man City defender Joao Cancelo (£7.4m) is also a popular transfer out for managers. Over 281,000 managers have sold the defender, many likely thinking he would be suspended in Gameweek 16. However the defender will be available to play as he served his red card suspension in the League Cup.