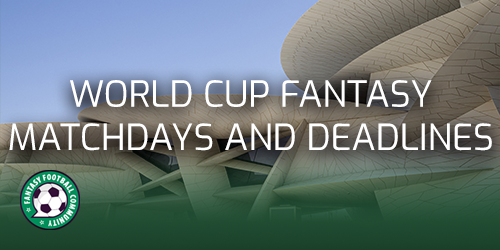 The World Cup is a very intense and aggressive campaign in terms of timescale. For that reason, it will be vital to know when Matchdays finish and when the deadlines are. This can hugely benefit fantasy managers when it comes to planning for the fantasy campaign ahead.

As we can see the gap in between Matchday 1, Matchday 2 and Matchday 3 are extremely small. This means fantasy managers have just hours to get their teams ready through the group stages. We can also see that as the tournament progresses, the time in between each Matchday increases. This gives managers even more time to prepare for the next Matchday.

What we can’t see in the graphic above is how much time there is between each matchday, primarily between the group stage matches. There is just 15 hours between the end of Matchday 1 and the beginning of Matchday 2.

To see the three best picks from Brazil in World Cup Fantasy, check out our article here.