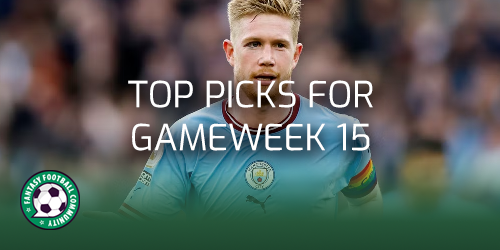 Filling in for David Munday’s regular look at the Gameweek’s top picks is Marc Jobling. Here, Marc selects who he thinks will be three of the top players for Gameweek 15.

The brilliant fixtures of Gameweek 14 have quickly made way for a tough-looking follow-up. In true FPL style, last weekend turned sour for many thanks to the likes of Ivan Toney, Bukayo Saka and Phil Foden. Additionally, Harry Kane blanked at Bournemouth, Liverpool lost at home to Leeds and Erling Haaland didn’t play at all.

So I’ve picked out three top picks that could have a solid impact on your team this week.

In truth, these three spots could easily all be Man City players. Haaland has been spotted back in training, while surely – surely – Foden won’t get benched for a third successive league match.

Yet Kevin De Bruyne is hard to ignore, with goals in his last two matches and just one blank from seven. Facing Fulham at home isn’t as easy as in previous years but City are still backed to score numerous times on Saturday and no player has created more chances than De Bruyne (38) this season.

His expected goal involvement (7.81) ranks second amongst midfielders, narrowly behind Mohamed Salah. Expect him to also be one of the top picks for Gameweek 16.

De Bruyne isn’t the most-bought Belgian midfielder of this week. That honour goes to Brighton’s Leandro Trossard, with only Newcastle pair Callum Wilson and Miguel Almiron being purchased more often.

He seems to be actively winding up FPL managers of late, blanking after one million pre-Nottingham Forest transfers yet following it up with goals against Man City and Chelsea. Add this to October’s hat-trick away to Liverpool, is Trossard simply a better asset against the top sides?

According to Scout editor Neale’s research, yes. He is far better when Brighton aren’t expected to break down a resolute defence like Forest’s. Meanwhile, Wolves’ last home game ended in a 4-0 loss.

It’s not necessarily about out-of-position potential for Rashford, as last week’s winner against West Ham came from playing out wide. It was his first league goal since Gameweek 12 but, with uncertainty over his place in England’s World Cup squad, he’ll be hoping to gain goal-scoring momentum when away to Aston Villa and Fulham.

The first is a debut match for new Villa boss Unai Emery but they were hammered 4-0 in Gameweek 14. With Cristiano Ronaldo playing all 90 minutes of Sunday’s and Thursday’s wins, perhaps this is FPL midfielder Rashford’s turn to play up front.