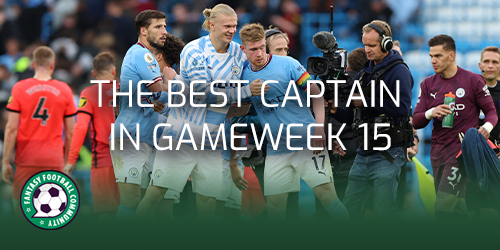 Captaincy is one of the most important decisions a manager can make. Writing up a shortlist of options can be helpful. Picking out the best however, can be even more important for FPL managers.

Below you can see teams near the top with the easier fixtures, going all the way down the table to teams with the tougher fixtures. The season ticker can be very helpful. However, won’t always give us the full story on which players make the best captaincy options.

It is worth noting that Tottenham, Liverpool Arsenal and Chelsea face a tough fixture against each other in Gameweek 15. This could indicate avoiding the use of the captaincy in any of this teams beneficial to FPL players.

Leeds, Brentford, West Ham and Bournemouth make up four of the five teams with the best fixtures in Gameweek 15. However, none of these teams have consistent and reliable assets to hand the captaincy armband.

Man City rank third on the fixture ticker with a match against Fulham. The Premier League holders have sustained some of the best offensive and defensive underlying stats amongst all teams in the league this season. For that reason, Man City look to be the standout team to invest the captaincy in.

Man City striker Erling Haaland (£12.1m) still sits as the highest scoring and highest owned player in the game. The forwards relentless FPL output has consisted of a whopping 17 goals and three assists. That fantastic form has also been reflected in his offensive stats.

Amongst all players in league, Haaland ranks first for goals, third for attempts on goal, second for attempts in the box and first for big chances total. Haaland continues to maintain great stats which could indicate that he could maintain his amazing run of form.

Erling Haaland is the standout captaincy option for Gameweek 15. However, it is vital we monitor his current injury. If we get news the striker will not be involved, then Man City have another great captaincy option.

Midfielder Kevin De Bruyne (£12.5m) may not be able to match his teammate Erling Haaland’s incredible form, but he has been outstanding this season. So far this season De Bruyne ranks as the third highest scoring player in FPL. In the 12 matches played, the Belgian has managed to pick up returns in nine of them.

Amongst all players in the league, De Bruyne ranks first for assists, first for chances created and first for big chances created. If Erling Haaland fails to start the match and we hear news of that, Kevin De Bruyne could be the next best captaincy option for Gameweek 15.

Are you using the free hit in Gameweek 15? You can check out our best free hit article here.