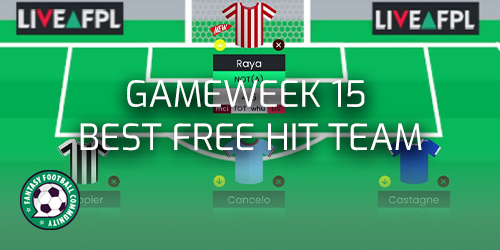 With a new Gameweek upon us we take a look at the free hit chip. Using the Fantasy Football Scout members area we can use the help of the season ticker and underlying stats to determine the Gameweek 15 best free hit team.

We can see that Leeds, Brentford, Man City, West Ham and Bournemouth make the top five teams for having the easiest fixtures. This could indicate it may be beneficial to invest in those teams when building the free hit.

We can see that Fulham, Tottenham, Liverpool, Arsenal and Chelsea make the bottom five teams for having the toughest fixtures. This could indicate it may be beneficial to avoid those teams when building the free hit.

Using the Live FPL website we can use one of its fantastic tools available to plan transfers weeks in advance. Not just this, but we can also create team drafts to plan for using a chip. Take a look at the best free hit team for Gameweek 15:

Brentford rank second on the fixture ticker with a match against Nottingham Forest in Gamweweek 15. The newly promoted side have been statistically one of the worst attacking sides in the league. For that reason, it could be beneficial to select Brentford’s David Raya (£4.6m).

Newcastle have been one of the best defensive units in the Premier League this season. As well as clean sheet potential, Kieran Trippier (£5.9m) has maintained some of the best distribution stats in the game. In addition, the defender also takes set pieces. These factors only further his ever-increasing appeal. Like Newcastle, Man City have also sustained great defensive stats. Joao Cancelo (£7.4m) has proven his attacking ability in all competitions this season and simply has to make our free hit teams.

Leicester have turned their defensive woes around as of late. Because of this and his attacking potential, budget defender Timothy Castagne (£4.6m) could be a fantastic inclusion. Budget defenders Marc Guehi (£4.4m) of Crystal Palace and Nottingham Forest’s Neco Williams (£4.1m) make as solid backups if needed. They are both highly likely to remain on the bench.

Man City sit third on the fixture ticker with a game against Fulham. It could be wise to include premium midfielder Kevin De Bruyne (£12.5m). The Belgian has proven to be a consistently reliable asset and maintains some of the best distribution stats amongst all players in the league. Another Belgian managers could select is Brighton’s Leandro Trossard (£6.9m). The attacker has recently scored against both Man City and Chelsea. Trossard also sits as the third highest scoring midfielder in the game.

As well as being defensively impressive, Newcastle are also scoring plenty of goals. For that reason, it could be worth including the second highest scoring midfielder in the game. The in-form Miguel Almiron (£5.6m) has now hit three back-to-back double-digit hauls in a row. Leeds rank fist on the fixture ticker with a game against Bournemouth. There could be potential for young American Brenden Aaronson (£5.5m) to expose one of the worst defences in the league.

Man United have a great fixture against Aston Villa in Gameweek. The struggling side have conceded two or more goals on six occasions this season already. Marcus Rashford (£6.6m) has now scored in his last two back-to-back matches in all competitions. The winger could well be worth investing in.

Monitoring the injury of Erling Haaland (£12.1m) could be absolutely vital as he also takes the captaincy armband. The Man City forward has dominated FPL since his arrival, plays for the best attacking side in the league and sustains better offensive stats than every other player in the league.

Newcastle’s increasing overall form could be worth doubling up on their attack. For that reason, striker Callum Wilson (£7.5m) makes the team. His 19-point haul could be viewed as a great reflection of his potential. Bournemouth striker and penalty taker Dominic Solanke (£5.7m) sits as a great first substitute just in case an attacker fails to feature.

Which players are due a goal in Gameweek 15? Check that out in our article here.