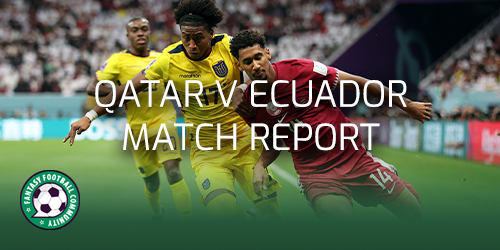 The World Cup is now here. Our first kick off begins with the hosts. We take a look at the Qatar v Ecuador match. We will highlight the line-ups, pick out the key moments and standout World Cup Fantasy performances during the match.

Readers may recognise Brighton defender Pervis Estupinan (£4.5m). Many within the community may have selected Estupinan and will be hoping for a clean sheet. Ecuador captain Enner Valencia (£6.5m) will be seeking to lead his team to victory.

Qatar were extremely poor defensively and offensively despite early signs of some quality. This leads me to believe that backing assets from teams playing against them moving forward could be hugely beneficial. Qatar were blunt in attack and open at the back and Ecuador’s Enner Valencia took advantage of their defensive fragilities.

Although it was a very solid performance by Ecuador, it is very difficult to measure how good their team and assets are because of the quality of their opponents.

You can catch up with all of our World Cup Fantasy articles right here.