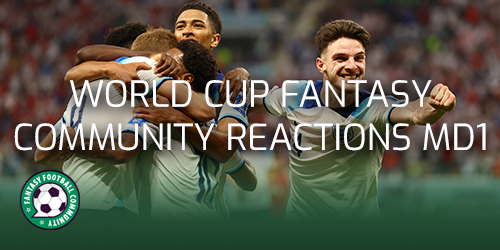 The World Cup is here! The matches are now underway and many within the community will be recating to all of the key moments that has happened so far. We delve into Twitter and check out some of the best World Cup Fantasy community reactions in Matchday 1.

Checking out the community reactions in Matchday 1 can be really beneficial to World Cup Fantasy managers. Community reactions can highlight things like line-ups, performances and key moments that could have a major impact on our fantasy teams.

Fantasy Football Community contributor Nick, like many, is still waiting for his points updated from the Ecuador match. Many were hoping for quick and efficient point updates from FIFA’s World Cup Fantasy game but that wasn’t to be.

Although managers within the community are frustrated by the pace of the updates, FIFA have stated on the website that they are working on the issue and that they are looking to resolve it as soon as possible.

Andy highlighted one of the key moments in the game. Ecuador took advantage from a poor defensive performance by Qatar. One of those players who contributed was the Ecuador captain and striker Enner Valencia (£6.5m).

Enner Valencia earned a penalty after the goalkeeper brought him down. Valenica stepped up to put the penalty away. His success continued as he headed home from a whipped cross to make it 2-0. Valencia’s brace helped towards Ecuador’s first win of the tournament.

Qatar face Netherlands in Matchday 2. Many within the community could be looking to double or triple up on Netherlands assets and may even consider utilising the captaincy feature against the hosts as the tournament progresses.

Jamie mentions he was, like many predicting a low scoring win for England but as the goals kept going in, England’s fantasy assets kept firing home World Cup Fantasy points. One of those assets was the popular striker Harry Kane.

Harry Kane claimed the assist for the third goal. Another popular World Cup Fantasy asset was England left back Luke Shaw who also picked up an assist. Shaw continues to prove he is a fantastic international fantasy asset.

To keep up to date with all of our World Cup Fantasy articles be sure to check out the link here.