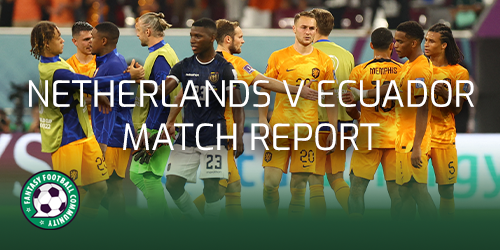 The World Cup continues. Our second match of Group A begins this afternoon. We take a look at the Netherlands v Ecuador match. We will highlight the line-ups, pick out the key moments and standout World Cup Fantasy performances during the match.

Star striker Memphis Depay (£8.5m) does not start the game despite featuring in Matchday 1. Many within the community will be hoping defender Denzel Dumfries (£6m) continues his World Cup Fantasy success.

Enner Valencia (£6.5m) will look to extend his World Cup run with more goals. The striker bagged a brace in Matchday 1 against the hosts Qatar. Many managers may have sold their Ecuador defensive assets ahead of the match. One of those sold could be defender Pervis Estupinan (£4.5m).

The Netherlands really struggled to break Ecuador down throughout the game. Ecuador were fantastic and looked to have created more than their opponent. Enner Valencia was brilliant during the game and proved how dangerous he can be.

Although Netherlands were struggling, they face a much weaker side in Matchday 3 against Qatar whilst Ecuador face a tough game against Senegal.

We brought in our international fantasy expert to give us his early team thoughts for Matchday 3, check out what he plans to do here.