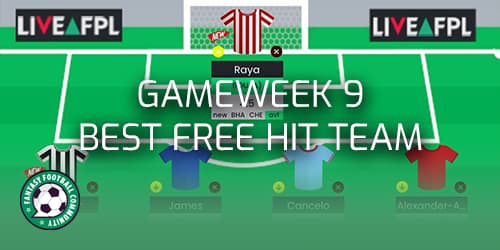 With a new gameweek upon us we take a look at the free hit chip. Using the Fantasy Football Scout members area we can use the help of the season ticker and underlying stats to determine the gameweek 9 best free hit team.

The free hit chip in FPL allows managers, within the same budget and formational limits, to select a team for one particular gameweek. Managers can attack any given gameweek with the free hit whether that be to utilise a good set of fixtures, in-form teams or players or a mixture of it all. However, Experienced FPL managers usually tend to use the chip in blank gameweeks.

We can see that Leicester have the easiest fixture amongst all teams in the league. Joining them in the top five are Brentford, Southampton, Leeds and Newcastle.

Manchester United have the toughest fixture amongst all teams in the league. Joining them in the bottom five are Brighton, Tottenham, Crystal Palace and Arsenal. Interestingly, Arsenal face Tottenham in their Gameweek 9 match.

Using the Live FPL website we can use one of its fantastic tools available to plan transfers weeks in advance. Not just this, but we can also create team drafts to plan for using a chip. Take a look at the best free hit team for Gameweek 9:

Although it could be tempting for managers to play Leicester’s Ward (£4m) it’s Brentford man Raya (£4.5m) who gets the nod. Brentford rank second on the fixture ticker for Gameweek 9. Opponents Bournemouth have put up some of the worst attacking stats in the league so far and for that reason Raya makes the free hit.

Set piece specialist and Newcastle man Trippier (£5.4m) makes his way into the free hit. The potential for the clean sheet mixed with his fantastic distribution stats means he has multiple routes to points for the round ahead. James (£6m) has a match ahead against Crystal Palace. The Chelsea wingback notched up 14 attacking returns last season. His multiple routes to points means even if the clean sheet isn’t there, he could still return.

Although Man City face Man United in Gameweek 9, they have some of the best defensive stats in the league. Cancelo (£7.2m) sits as the second highest scoring defender in the game. His motivation to shoot on site and advanced positioning means he eases his way into the best free hit team. Liverpool defender Trent (£7.4m) is top for chances and big chances created amongst defenders. His potential is clear after his huge 17-points haul in Gameweek 4.

Amongst all players in the league Liverpool attacker Salah (£12.9m) makes the top ten for attempts in the box and big chances total. In addition, he is also joint first for chances created. Against a Brighton team who have just lost long term manager Potter, Salah makes the best free hit team.

Leicester rank first on the fixture ticker for the round ahead. Thier Gameweek 9 opponents Nottingham Forest make the top five worst teams for goals conceded, clean sheets kept and the worst for goal attempts on target conceded, amongst all teams. For that reason, Maddison (£7.9m), combined with the fact he is one of the best in the league for attempts on goal, makes the team.

Everton attacker Gordon (£5.6m) plays a fixture against Southampton in Gameweek 9. Gordon can be one of the most advanced players on the pitch for Everton. The young talent can, at times, lead the counterattack. His cheap price-tag also means he can help enable the pricier options within the team.

Man City’s Haaland (£12m) and Mitrovic (£6.9m) both make the top two players in the league for goal attempts, attempts in the box and big chances total. Both forwards have proven that regardless of opponent, they can still score.

Brentford rank second on the fixture ticker for having the easiest opponent in Gameweek 9. Ivan Toney (£7.3m) faces one of the worst defences in the league, takes the penalties and has had a fantastic start to the season in FPL. For those reasons, Toney has to be considered.

Which players are due a goal? You can check out our article covering that here.