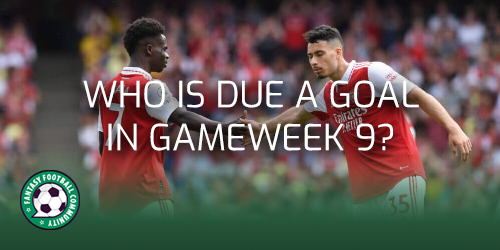 Picking out the players that look likely to score in an FPL gameweek is a big part of management. Using recent underlying stats from the Fantasy Football Scout, we assess which players are due a goal in Gameweek 9.

Due a goal in Gameweek 9

After the complete postponement of Gameweek 7 was followed by a partial Gameweek 8, the Premier League should return to normal after this international break. It’s one big push before the winter World Cup begins.

Two Liverpool players are due a goal, with Darwin Nunez‘s (£8.9m) data only based on three appearances. Even more impressively, the 15 shots and 2.03 expected goal involvement (xGI) came in just 174 minutes.

A home game against Brighton is tricky for both him and Mohamed Salah (£12.9m). They have failed to win three of their last four meetings with the Seagulls – a side that has conceded the league’s fewest goals so far and has the exciting uncertainty of new head coach Roberto De Zerbi.

Fixtures are about to turn for league leaders Arsenal. Preceding a Blank Gameweek 12 are home matches versus Tottenham and Liverpool, plus a trip to Leeds. Gabriel Martinelli (£6.6m) has a 47 per cent ownership that continues to rise despite two successive blanks.

Meanwhile, Bukayo Saka (£7.8m) has attacking returns from each of his last four outings – one goal, four assists but only one bonus point. His total of 37 is just two short of more popular teammates Martinelli and Gabriel Jesus (£8.1m).

It’s strange to label Kevin De Bruyne (£12.3m) as underachieving, considering he is FPL’s fourth-highest scoring player. Five of his six starts have ended with at least one attacking return. The Manchester derby provides plenty of motivation for the Belgian to keep going.

Finally, a surprise entry is Brighton’s Solly March (£5.0m). He has amassed 13 goal attempts from right wing-back but is about to go against Liverpool (a) and Tottenham (H).