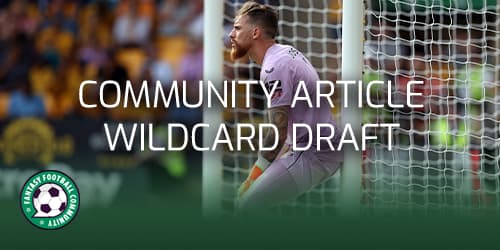 Belal Ahmed has four top 8k finishes in the last five seasons. His best rank came in the 2012-13 season, when he finished 1289th. He is one of those elite managers who have five top 10k finishes. A legend of Bangladesh’s Fantasy Football community spoke to his compatriot and old friend FPL_Poet, a member of our FFS Network, about his latest Wildcard draft.

Wolves have a decent run of fixtures, with six of their next eight games to be played against relatively easy opponents. They have already kept three clean sheets so far this season and the Wolves custodian is the second highest scoring goalkeeper at the moment. He is a set and forget option for me now.

Cancelo is too good an option to be ignored. I chose him over Trent Alexander-Arnold (£7.4m). This is because the Liverpool defender has recorded a return in just a single game, against Bournemouth. If Liverpool show improved form, I will consider him after the Man City match that is in Gameweek 11.

Trippier has recorded five or more points in six of the eight games this season and I see no reason to not select him.

James hasn’t hauled yet. But Chelsea have good run of fixtures, even beyond Christmas. This is a period when you expect him to replicate last season’s form.

Marc Guehi (£4.3m) and Neco Williams (£4.1m) are the defenders who will sit on my bench. However, they are excellent enablers. Till the end of the year, Crystal Palace have only two games that have an FDR rating of over two.

Which is one of the reasons I am getting Wilfried Zaha (£7.2m). He is in excellent form, already scoring four times in five games. The next few games are ideal for someone like him to get on the scoresheet.

In my midfield, the Ivorian will be joined by FPL magnet Mohamed Salah (£12.9m), who I will be captaining this week. As well as Gabriel Martinelli (£6.6m) and James Maddison (£7.9m).

I really do not have a specific reason to hand the armband to the Egyptian forward apart from my gut feeling. I can see a haul coming this week. I am glad that he got some rest as he did not have to play the second friendly for Egypt.

At £6.0m (my purchase price), Martinelli is still value for money. Arsenal, as a team, are doing well and his stats are alluring. He is very likely to take the penalties, too.

Maddison has three goals and an assist so far despite his team fairing very very poorly. Like Zaha, he has juicy fixtures as well.

I guess Erling Haaland (£12.0m) and Aleksandar Mitrovic (£6.9m) are automatic choices at the front. They are fixture-proof, scoring for fun and are also on penalties.

I would probably have gone with Alexander Isak (£7.0m) as my third striker, but his injury means I have brought in an in-form Ivan Toney (£7.2m). He is a natural goal-scorer and till the World Cup Brentford’s fixtures looks set to bring more joy for his owners.

Wondering what to expect from the Gameweek 9 fixtures? Check out out recent article.