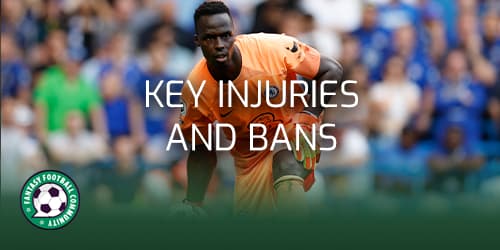 Being able to navigate around unavailable players is key to FPL success. Together with some useful Fantasy Football Scout information, here is the current list of injuries and bans heading into Gameweek 8.

INJURIES TO MONITOR AHEAD OF GAMEWEEK 8

Edouard Mendy (Chelsea) – Shoulder. Will be assessed after suffering a late injury in GW6 versus West Ham.

Jordan Pickford (Everton) – Thigh. Not expected back until after the international break.

Dominic Calvert-Lewin (Everton) – Knee. Hasn’t played yet but is about to resume training.

Rasmus Kristensen (Leeds) – Knock. Suffered in training ahead of Gameweek 6.

Kyle Walker (Man City) – Knock. Will be assessed after “problems” against Aston Villa in Gameweek 6.

Bruno Guimaraes (Newcastle) – Hamstring. Expected to be back by Gameweek 7.

Allan Saint-Maximin (Newcastle) – Hamstring. Expected to be back by Gameweek 7.

Raul Jimenez (Wolves) – Fatigue. Pulled out of GW6 squad because of “little pains”.

RULED OUT OF GAMEWEEK 8 – MAIN INJURIES

Diego Carlos (Aston Villa) – Achilles. Out for a long time because he ruptured his tendon in Gameweek 2.

Sergi Canos (Brentford) – Hamstring. Occurred in pre-season and he is yet to return.

Jakub Moder (Brighton) – Knee. Long spell on the sidelines after a serious injury from April.

Ben Godfrey (Everton) – Leg. Fractured his fibula in Gameweek 1 so is out for three months.

Rodrigo (Leeds) – Shoulder. Next up, the popular Spaniard who will miss three to four weeks because of a dislocated shoulder.

Stuart Dallas (Leeds) – Leg. Because of this fracture, Dallas will be kept out for several more months.

Anthony Martial (Man United) – Achilles. Inititally ruled out of Gameweek 4 but there is still no timeframe on a return.

Emil Krafth (Newcastle) – Knee. Out for the long-term, he may not return this season.

Romeo Lavia (Southampton) – Muscle. Hurt during Gameweek 5 and out for a minimum of six weeks.

Tino Livramento (Southampton) – Knee. As a result, he is likely to miss the rest of 2022.

Sasa Kalajdzic (Wolves) – Knee. He sadly suffered a serious injury on his Gameweek 6 debut and will be out for a while.