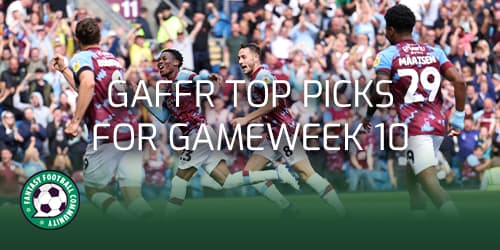 With a quick turnaround we take a look at the GAFFR top picks for Gameweek 10. Using the fixture ticker on the Official GAFFR website and form we can pick out some players with lots of potential for the upcoming gameweek.

Looking at GAFFR top picks for Gameweek 10 can help managers with those all-important decisions as the deadline quickly approaches. Deciding on which players to bring in and which players to captain are two of the biggest factors in any given gameweek. With the options below we can hopefully bring some clarity.

The Rotherham and £5.7m midfielder could be seen as a hidden gem within the game. Although categorized as a midfielder Chiedozie Ogbene can play as a forward. Fantasy managers are always looking for out of position players and Ogbene can offer exactly that.

Ogbene currently sits at 46 GAFFR points, edging GAFFR favourites like Swift and Willock. He faces a meeting against Blackpool in Matchday 10 who have been very inconsistent this season. With three losses, three wins and two draws, it could be difficult to judge which Blackpool turn up. For that reason and at a cheap price, Ogbene becomes a top pick for the gameweek ahead.

The £6.1m premium defender, although coming in at a high price, can certainly reward owners for investing in him. Ian Maatsen proved his potential with his goal and clean sheet against Huddersfield and latest assist against Hull City. His attacking abilities are clear.

Defensively, Preston are one of the best teams in the league defensively, but lack for goals. In their 10 matches so far this season Preston have failed to score in a huge six of them. With big potential for the clean sheet and fantastic offensive ability. Maatsen should be considered ahead of Gameweek 10.

Middlesbrough had some really tough fixtures at the beginning of the season against the likes of West Brom, QPR, Sheffield United and Watford. For that reason, there was a lack of clean sheets. However, they now face a fixture against struggling Cardiff. The Welsh side have failed to win for six gameweeks and have failed to score in their last six games four times.

£6.1m defender Ryan Giles currently sits as the sixth highest scoring defender in the game with 48 points. The attacking defender has already picked up three assists so the attacking potential is there. Combined with his great opponent and clear offensive ability, Ryan Giles becomes a great pick for Gameweek 10.

It has been a slow start to both the official season and the GAFFR season for £11.4m Pukki. The premium forward had high expectations at the start of the campaign but failed to hit those high hopes of his GAFFR owners. After taking a price drop already the forward could be on his way back to his best.

After both starting and scoring in his last match the tide could now be turning in Pukki’s favour. Although very dangerous Bristol City can concede goals. Norwich’s Gameweek 10 opponents have conceded two or more goals in four of their Championship matches already this season. There are defensive fragilities for Pukki to explore and for that reason could be a top pick for the match ahead.

QPR have been inconsistent in terms of results. However, when they score goals, they score them in plenty. In their first eight games of the new season QPR managed to net two or more goals in half of those games. This shows that investing in the QPR attack could be hugely beneficial for GAFFR managers.

£8.2m midfielder Chair remains the highest scoring player in his position bracket. His massive 66 points consist of three assists and three goals. Upcoming opponent Huddersfield continue their dire form to the season. They now stand at five losses already and are yet to keep a clean sheet. For those reasons Ilias Chair becomes a top pick for Gameweek 10.

Remember, you can stay up to date with all of our GAFFR Championship Fantasy articles right here.