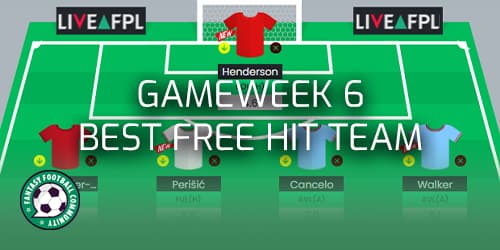 With a new gameweek upon us we take a look at the free hit chip. Using the Fantasy Football Scout members area we can use the help of the season ticker and underlying stats to determine the gameweek 6 best free hit team.

The free hit chip in FPL allows managers, within the same budget and formational limits, to select a team for one particular gameweek. Managers can attack any given gameweek with the free hit whether that be to utilise a good set of fixtures, in-form teams or players or a mixture of it all. Experienced FPL managers usually tend to use the chip in blank gameweeks however.

The Fantasy Football season ticker has many benefits. FPL managers can select any period of fixtures whether that be one match, ten matches or however many we’d like to indicate which teams have the best fixtures in that given period.

We will look at gameweek 6 specifically to see which teams have the easiest fixtures to help us build the best free hit team for the round ahead.

We can see that Tottenham, Nottingham Forest, Bournemouth, Wolves and Brentford all sit as the top five teams with the easiest fixtures for Gameweek 6. This could indicate that investing in their teams could be a good idea when building a free hit team.

Although teams like Man City and Liverpool sit around mid-table in terms of their fixture difficulty their form suggests it would be sensible to invest in their players.

Everton, Aston Villa, West Ham, Fulham and Arsenal are all close to the bottom, this suggests that avoiding their assets could be a good idea for FPL managers in their free hit.

£4.6m goalkeeper Henderson reigns at the top of the pile with more FPL points than any other keeper in the game. With a meeting against Bournemouth at home Henderson’s potential is high as the Cherries are struggling to score goals.

£4m Ward of Leicester is the cheapest playing goalkeeper in the game and will only come on if Henderson misses out.

£7.5m defender Trent makes the free hit team with ease. Upcoming opponent Everton have been struggling for results and the Liverpool defender reminded everyone of his potential in Gamewek 4 with his 17 point haul. Tottenham rank first on the fixture ticker this week which means buying into their defence could be beneficial. £5.6m Perisic makes the team due to his offensive ability and price as well as fixture.

Aston Villa have been out of sorts as of late and Man City have fantastic underlying defensive stats. for that reason a double up in defence could be a great route to points in Gameweek 6. Both £7.1m Cancelo and £5.1m Walker make the free hit.

Not only does Salah make the team but he also takes the captaincy armband. The Egyptian will be looking to get back to his best and that could come against the struggling Everton. Joining the three-man midfield is the exciting £5.5m Aaronson. With Rodrigo out to injury Leeds could look to Aaronson to create and assist.

Wolves rank fourth on the fixture ticker with a match against Southampton. At the time of writing the saints have failed to keep a single clean sheet this season. The potential is there for the £5.2m Neto. Although the Portuguese attacker has failed to impress his Gameweek 6 opponent could change that.

£11.4m striker Harry Kane continues is impressive start to the season. At the time of writing, Kane has managed consecutive FPL returns in his last three matches and with Fulham up next that could extend even further.

Brentford rank fifth on the fixture ticker and £7.2m Toney could be best pick of the bunch. His 28 FPL points consists of two goals and two assists. Toney has the chance to regain that form after failing to return any significant points against Leeds who have failed to keep a clean sheet this season so far.

Bournemouth have conceded a whopping 18 goals in their first four matches this season already. This averages out at 4.5 goals conceded per match. With Scott Parker now sacked there’s no telling if that makes them more targetable but their poor defence is hard to ignore. For that reason, Nottingham Forest attacker £5.9m Brennan Johnson makes the team.

Are you Wildcarding in Gameweek 6? Check out our best wildcard article here.