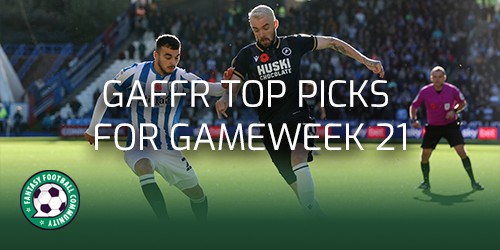 We go through the GAFFR top picks for Gameweek 21 using stats, form and fixture ahead. After the double Gameweek 20, we look ahead to the new round ahead. Gameweek 21 starts on the 11th of November. This means managers have under 48 hours to get their teams ready.

Going through the GAFFR top picks for Gameweek 21 can be hugely beneficial. As fantasy managers we are always looking for players who could do really well in the next round. For that reason, picking out some of the best assets for the Gameweek ahead can be detrimental to chase down the competition.

James Bree maintains himself as one of the best assets in GAFFR this season. The defender sits top of the pile in his position with a whopping 130 points. Bree has managed just two assists this season, but his great distribution stats suggest he has fantastic offensive potential. Bree managed five key passes in his previous match against Stoke. Once again, James Bree must be considered amongst the top picks for Gameweek 21.

We come to another inconsistent team that sit 11th in the Championship at the time of writing. Millwall had a really positive set of results in October. They picked up four wins on the bounce. Although that winning form has taken a dip, the clean sheets are still there. Millwall have now picked up clean sheets in both of their previous two matches.

One of the most appealing assets at Millwall could be Scott Malone (£6.5m). The defender has become one of the go-to assets recently when looking to invest in Millwall. Although his GAFFR season has not been to his usual standard, Malone has still picked up an impressive four assists in his current campaign.

Coventry’s recent form has become increasingly appealing for GAFFR players. In fact, their dire start to the season led to them not picking up a win until October. That poor form has seen a complete U-turn. In their last 10 matches, Coventry have collected six wins, taking them from rock bottom, all of the way up to 12th in the Championship.

Coventry face a QPR team who have been slipping lately. The London team have managed just one win in their last five matches, drawing once and losing three. The increasing form of his team and the decreasing form of his opponent could be enough to bring in striker Viktor Gyökeres (£8m).

Viktor Gyökeres became a GAFFR favourite amongst manager’s last season. Although his form hasn’t been anywhere near his best, the forward has now netted three times in his last five matches. It could be also worth taking into account that his team have a double Gameweek coming up in Gameweek 23.

Sheffield United have proved to be one of the strongest sides in the league. They currently sit third in the Championship and just three points off first place Burnley. For that reason, it could be wise to invest for those that have not already. Thier fantastic start to the season may only improve with a meeting against out of sorts Cardiff next up. The Welsh side have been inconsistent for the majority of the season and have conceded two or more goals on a huge nine occasions this campaign.

One of the assets we could highlight is midfielder Ilian Ndiaye (£7.8m). The 22-year-old has made a brilliant start to the season. In his 20 domestic matches played so far, Ndiaye has managed to score nine goals and create two assists. Interestingly, he has also hit three goals and one assist in his last three matches. In-form and with a great fixture ahead means Ilian Ndiaye is considered amongst the top picks for Gameweek 21.

Looking to play World Cup Fantasy? We have an entire section dedicated to articles to prepare you for that here.