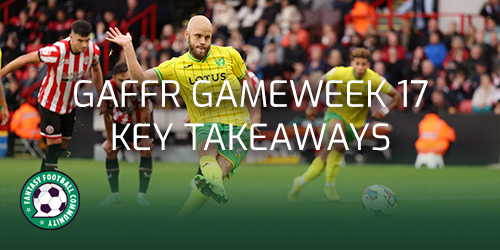 Taking a look at GAFFR Gameweek 17 key takeaways. We go through each and every game that played in the Championship in the most recent round. Taking into account clean sheets, assists, goals and bonus points we highlight the most successful assets in Gameweek 17.

Picking out key moments in each game every Gameweek can give GAFFR managers even more information to make those all-important decisions for the Gameweek ahead. Whether it be for transfer plans or captaincy, the more information we have the clearer our decisions could be.

This week we saw a six-goal thriller between the two sides. Blackpool came out on top with their huge 4-2 victory. The big returners came from the home side. Striker Yates (£5.6m) finished a massive 19-point haul for his goals, assist and bonus points.

Blackburn continued their fantastic start to the season with their 2-1 win against opponents Birmingham. Picking up the biggest return of the match was Birmingham striker Hogan (£6.1m). The forward bagged 11 points for his goal and bonus.

Not far behind Hogan was Blackburn striker Gallagher (£6.4m). He collected his 10-point return from his goals and bonus points.

It was a battle between two inconsistent sides. This match ended in a 0-0 stalemate. The biggest success was Middlesbrough defender Jones (£6.6m). He returned 10 points for his clean sheets and bonus. Huddersfield defenders Lees (£5.4m) and Helik (£5.5m) both picked up eight points each for their clean sheets and bonus.

West Brom continued their poor start to the season. The home side took the three points with their 2-1 win. Three players hit 10 points in the match. One of those players was midfielder Styles (£5.5m). His return came from his goal and bonus. Matching Styles was fellow teammate and midfielder Burey (£4.9m). He came off the bench to secure a goal and bonus.

The third player to hit 10 points was West Brom midfielder John Swift (£9.6m). His goal and bonus saw him match the Millwall attackers.

QPR continued their impressive start to the season with their 2-1 win. Picking up the biggest return of the game was QPR midfielder Johansen (£5.7m). The midfielder returned 13 points for his two assists and bonus. He was closely followed by QPR defender Balogun (£5m). He managed 12 points for his second half clean sheet, goal and bonus.

Another team that impressed once again was Reading. They took a comfortable 2-0 against Bristol City. The only player to bring in a double-digit haul was Reading midfielder Ince (£6.1m). He finished the game on 11 points because of his assist and bonus.

We saw another six-goal thriller this week. This time it was the away side taking a 4-2 victory away. The two players picking up double-digit hauls in this match were both playing for the away side. One of those players was defender Greaves (£4.9m). Greaves hit 13 points for his goal, assist bonus.

The other player to hit double-digits was midfielder Longman (£5.4m). Longman’s goal and bonus meant he picked up 10 points this week.

This was one of the most anticipated matches of the week. The match ended in a thrilling 2-2 draw but both sides were not without success in GAFFR. Norwich striker Pukki (£11.4m) claimed a 15-point return for scoring a brace and picking up bonus points.

The only other player in the match to hit double-digits was Sheffield United midfielder Osborn (£5.9m). Osborn hit 11 points because of his goal and bonus.

Two struggling sides met here. The match ended 2-0 to the away side but many felt that the game could have gone either way before the match. Two players collected double-digit hauls for their efforts. Coventry midfielder Hamer (£6m) scored, assisted and picked up bonus to return a massive 16 points.

The away team blew Sunderland away in their 4-2 win. Burnley midfielder Benson (£7.4m) came off the bench to pick up the biggest GAFFR return of the match. His 14 points was because of his goal, assist and bonus.

There were two players to secure double-digit hauls in the match. One of those assets was Burnley midfielder Zaroury (£7m). The Burnley attacker scored and took bonus to secure his 10-point return. Sunderland midfielder Diallo (£6m) also hit 10 points for his goal and bonus.

It was the battle of the Welsh teams this week. Swansea took the spoils in their 2-0 win. Due to Cardiff’s lack of performance, it meant none of their assets picked up double-digit hauls. It was all about the Swansea midfield. Cooper (£5.6m) scored and picked up bonus which contributed toward his 11 points.

Swansea midfielder Grimes (£6m) also collected an 11-point returns. Grime’s points were due to his assist and bonus.

Watford striker Pedro (£9.6m) also had success. Pedro picked up 11 points for his goals and bonus.

You can keep up to date with all of our GAFFR articles, all in one place, right here.